Webinar «How to choose lightning rods after all?», page 2

The tenth webinar of a series "Grounding and lightning protection: issues and problems arising in the design" 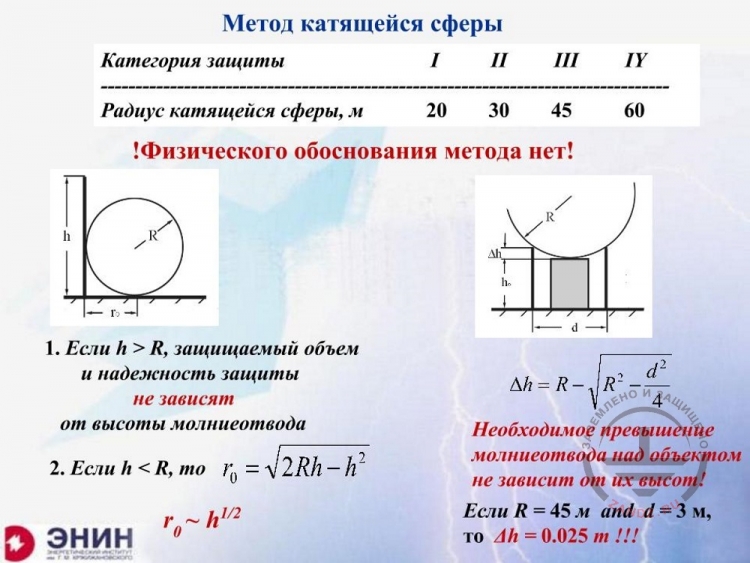 — So let's go on. The worst thing in IEC is rolling sphere radius. Rolling sphere radius is very beautiful and very simply, and is well-used in Europe. I will tell you what I mean. There are four standardized radii. The first protection level - radius of 20 meters, the last fourth lightning protection level - 60 meters radius. They are shown in my chart here. If I take this ball of such a radius and roll it around the lightning rod as it is shown here, then everything that is under it - will be protected area. Very easy and very beautiful. But the question is - who proved that this area is protected? And who proved that only this area is not? There is no answer to that. And now I will do the following thing. I start to increase lightning rod radius and the radius of this lightning rod achieves the rolling sphere radius. No matter how I increase lightning rod height, my protected area remains the same. The lightning rod height increases, but its protective effect doesn't. If we talk about the first protection level, about the highest with the reliability 0,98, then we are talking about very small radii. It turns out, that the radius of a lightning rod higher than 20 meter is useless to be applied. 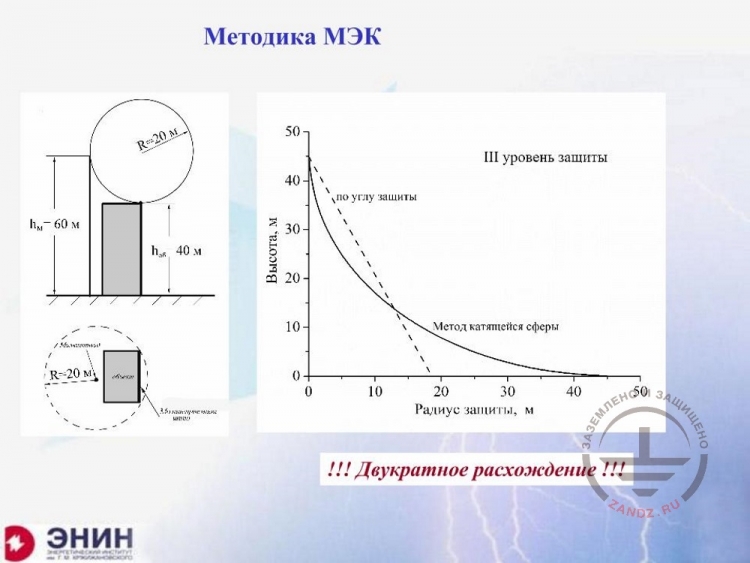 — Look at this situation. I took ab object, which is 60 meters high. 60-meters-heights are admissible for studying according to IEC standard. If I put a 60-meter-lightning rod above it, the object will be 40 meters, and then it won't be protected till one moment. If I don't put a grounded bus around the object, then rolling sphere will base on the bus and on the lightning rod, and it will be protected instantly. Protected from what? The bus doesn't raise above the object at all, but according to IEC methodology it turns out that introduction of this bus changes the situation completely. We asked the question why? We did not get any reply. And we made a thing, which was necessary to be done for IEC specialists. We built two protection zones. One protection zone at the protective angle, you see it in dotted line, the second - full line - along the rolling sphere radius. And we received completely different protected volumes, which in some places differ twofold. Now the designer has to guess what zone to choose? The one which works with the rolling sphere method or the one which functions with the protective angle? There was no response. Having studied these situations, we came to such a conclusion that it is very difficult to use all that in our lightning protection practical works. If to speak frankly, almost impossible. 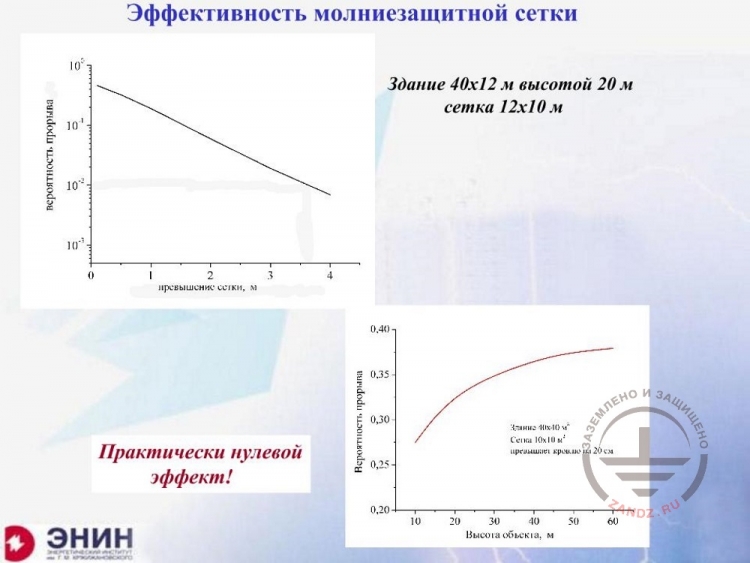 Превышает кровлю- elevates above the roof

— I can't leave one thing unattended. IEC standard allows using lightning protection meshes. They are allowed to be used for all 4 lightning protection levels, including the first protection level with the reliability of 0,98. In this case, IEC says that it is necessary to put lightning protection mesh with the distance of 5 to 5 meters on the building roof. And this mesh laid on the building roof will raise above the roof coating to 2 cm in the best case. And for some unclear reason, it will provide reliability at the level of 0,99. Why? Who can answer about this situation, when an absolutely uprising lightning rod will take 98% of lightning strikes upon itself. We calculated this situation in its real form and saw the following. If the mesh raises above the roof coating to less than 1 m, then its protection reliability is on the level very close to 0,5. That means, the mesh doesn't protect anything. Such a situation with lightning protection mesh which drew the mouth in all lightning protection discussions, exists in its present form in IEC standard. What would I like to hear from IEC specialists? I would hear the base why their standard is completely different with the use experience of overhead power lines, which was summarized by the commission on CIGRE distant networks. We posed this question very often, but heard no answer. That is why, frankly speaking, Russian specialists on lightning protection are very afraid of the situation, which can arise now. The situation is as follows.

—No questions yet. Colleagues, you can write your questions in the chat. We will make pauses during the webinar and will answer them. We can move on now. 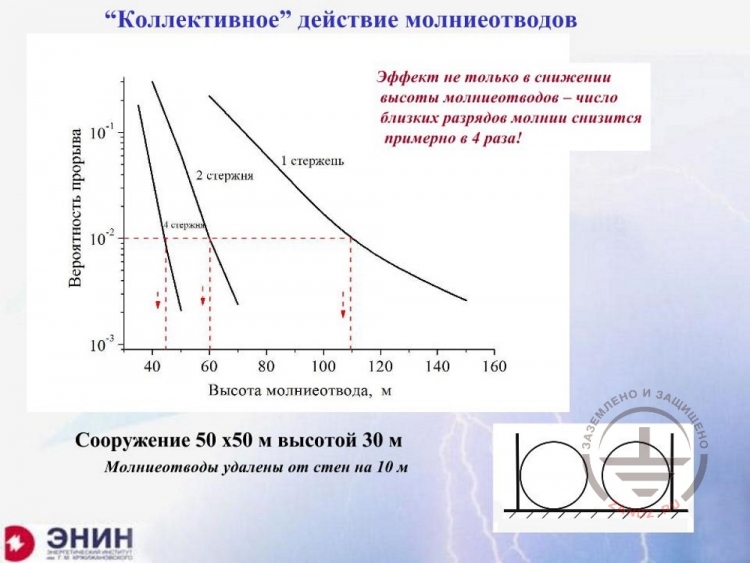 — There is another point in IEC I consider very important. If the distance between the lightning rods is larger than rolling sphere radius, then, according to IEC, each lightning rod should be studied as separate. It acts independently from all the other lightning rods. And use experience of overhead power lines says that if you have more than one lightning rods, for instance two ground wires, then the protection reliability increases drastically at the expense of their collective action. The right wire mostly accepts lightning from the right. The left one - from the left. The reliability of these two wires roses sharply. And the reliability of rod lightning rods roses sharply too, each of them takes greater number of lightning upon itself thanks to its back. Have a look at this example situation. The situation is as follows. There is a structure 50 x 50 m, 30 m high. I want to protected this building with a separately standing lightning rod, if my protection reliability will be on the level of 0,99. It means one lightning out of 100 breaks through, lightning rod height is higher than 100 meters. If I take two rod lightning rods, this height will be reduced to about 60 meters. If I take 4 lightning rods, my height will reduce to almost 4 meters. It's all because each lightning rod will take lightning strikes upon itself from its side. This effect of multiple rods is widely used in practice, but it doesn’t exist according to IEC standard. IEC doesn't tell anything about collective action of lightning rods. 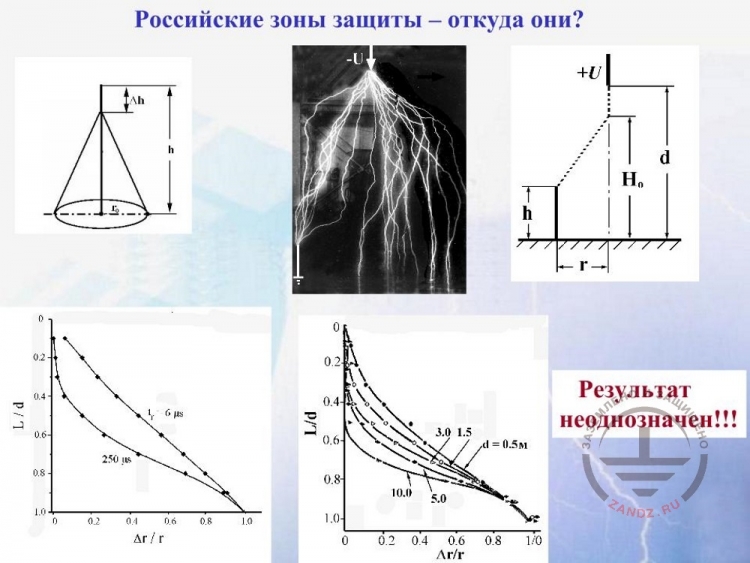 Russian protection zones - where do they come from?

Российские зоны защиты – откуда они? – Russian protection zones – where do they come from?

Результат неоднозначен – the result is ambiguous

— And now I want to talk about the following. Where do our lightning protection requirements come from? If to dig the pre-history of where do lightning protection zones come from, the ones our designers use and which are introduced in lightning protection standard and in AD-34 and IS-153 and institutional documents. Where does it all come from? The first thing which makes our lightning protection zone different is that they were tried to be built on some experimental facts. At first, there was talk of laboratory tests. A lightning rod layout was made in the laboratory and a layout of the protected object. Long spark played the role of lightning. At first, this spark was several meters long. In the recent experiments, this spark exceeded the length of 30 meters and then they looked, making thousands of discharges, where the spark goes to - lightning rod or protected object. This work, which was started in the Soviet Union in the 40s before the World War, ended without any result. For such a reason. It turned out, that it was hard to shift the results of these laboratory experiments to the nature. The result turned out to be different depending on two things. The first thing was - what was the modelling scale, that is, how long was the spark which models lightning? 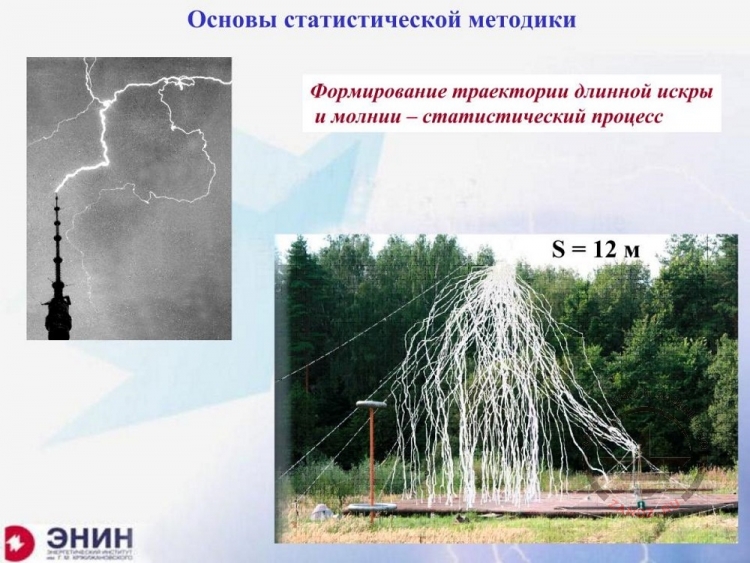 Bases of the statistical method

— Let's have a look at another moment. What do companies producing ESE lightning rods show? What do these companies show to their customers? I studied the modern French standard, which shows how to test ESE lightning rods and how to judge whether they are fine or not. I am showing you the real extracts from the standards. The first test - is a test for lightning current equal to 100 kA 10/350 ms to make sure the device is not damaged and remained mechanically safe. The next test for electromagnetic compatibility, if there are some semi-conductor or micro-processor managing devices. If not, do not test them. Then device test for its functioning in a salt fog. And a test in sulphur atmosphere. All these tests have no relation to the efficiency of ESE lightning rods operation. It is the same as if you were allowed to test an airplane and you would test the strength of chairs, brightness of light and volume of petrol tanks. And when you had to test how the airplane flies - why to test it? It's an airplane, it should fly. Companies do practically the same. What do they offer to test? It offers to put the head of an active lighting rod into a discharge gap, less than 2 meters long, and put an ordinary lightning rod near. Then give a voltage pulse with the front of 250 ms to it and see from which lightning rod - active or ordinary - streamer flash appears. If this streamer flash from an ESE lightning rod overhauls the ordinary lightning rod to 10 ms, the French standard considers this active lighting rod applicable for practical use. That's it! 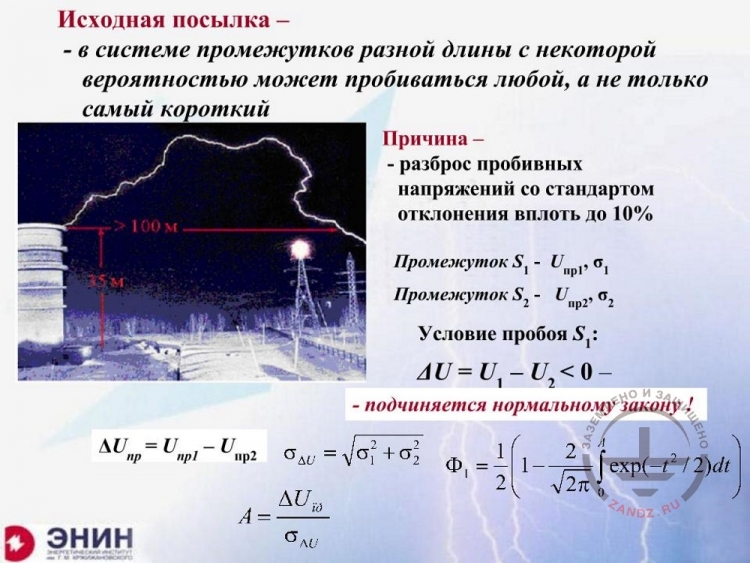 -  в системе промежутков разной длины с некоторой вероятностью может пробиваться любой, а не только самый короткий – In the system of gaps of different length, any, but not the shortest one can break through with some probability

— And there's another thing to be considered. The founders, Benjamin Franklin for example, said that lightning strike into the highest point, that means along the shortest trajectory. Just look what happens in fact. Well, here is the image. The height here is 34 meters. The spark discharge did not go to the bottom from here. The spark discharge went along the way, which is 3-4 times longer and stroke the overhead power line, which was laid near the territory of the stand of the Siberian Energy Research Institute, where the experiments were held. That means, if you have two parallel gaps, one of them is longer and the other is short. It is not necessarily will happen so that at this moment the shortest one will be punctured. The longer one can be punctured because of the statistical scatter of electric strength. And we can easily count the probability of such an event. For that, it is necessary to learn two things according to the probability theory - average value of sparking voltage of both gaps, they can be defined by the experiment and scatter standards of these sparking voltages.

Next Page >>
Slides from 15 to 19 + questions and answers session

Webinar «How to choose lightning rods after all?», page 1

Statistical methods of lightning protection 6. How to do that?