2. Energy consumption of control actions on a lightning

Experimenters are well aware of how much energy is required for a growing leader channel. For that, they had been measuring the current in its channel many times. At the most economical development mode quite moderate values were recieved - in the range of 1 A. The same order of magnitude were obtained in the calculation model that was used above. Growing from the lightning rod with the height of 50 m with an almost constant speed of about 2 cm/ms, the channel consumed the current iL≈0.5 A (Fig. 6) on the initial section of the path of about 10 meters long, where the question of its viability was actually being solved. During Δt=600 ms in this area the charge Δq = iLΔt=0.5×6×10-4=0.3 mC had been consumed. If to allow reduction of the control voltage to the level of 0.5 from the peak value during its development, then on the output capacity of the forming unit there should be accumulated a charge Q=2Δq=0,6 ml. At the voltage of control pulse ∆U=500 kV the required output capacity is C=Q/ΔU=6×10-4/5×105 ≈ 10-9 F = 1000 pF. 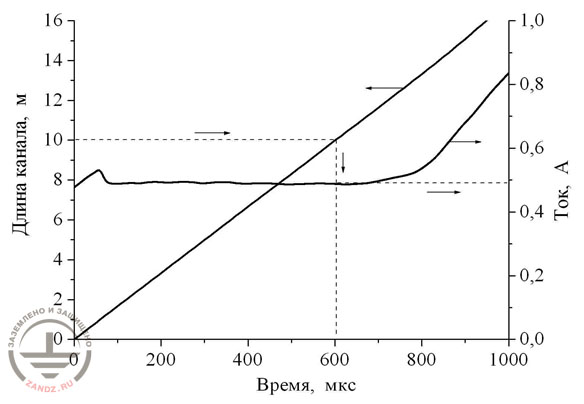 Figure 6. The dynamics of groth of the current and of the counter leader from a lightning rod 50 m high at a control action of 500 kW in the thundercloud 50 kV/m

We have to note the complexity of the technical issue that should be solved by the creator of the source of control actions for active lightning rods in a very limited technological space. In fact, the problem becomes even more serious when we talk about the source equally suitable for lightning rods of moderate height, for example, - 15 - 20 m. The electric field of a thunderstorm cloud at this height may be significantly weakened by the space charge of the corona from the system of irregularities on the ground surface (trees, bushes, grass, etc.). Here, it may well be at the level of 10 - 20 kV/m, and sometimes even lower. The potential of the peak in such a weak field U0=E0h essentially won't exceed 150 - 400 kV and therefore the charge of the reserve capacity with corona current to the desired voltage will be essentially impossible. We'll have to rely on voltage multiplication circuit, for example, to the well-known scheme of Marx, on the base of which traditional pulsed voltage generators are built (PVG).

To maintain the required energy consumption at a low voltage, it is required to increase the capacity of the capacitors battery according to the correlation

As a result, the capacity of the storage capacitor of the control device will increase as

Thus, when selecting the voltage level in the multiplying circuit U2 = 50 kV, the value of C2  should be increased to 0.1 ufd. Not only large dimensions of the storage capacitors will be an obstable, but the  the charge delivered to them

In fig. 7 you see the calculated dependence of the corona charge on time for a lightning 20 m in height. Even after 20s the generated charge will be still 7 times less than the required by the estimations. It remains to add that the recovery of the electric field of a thunderstorm cells can occur much faster and the charge will be even weaker. Of course, you can refuse to use corona current and charge the storage capacitors from an independent source, but it is much more expensive and requires more maintenance expenditures. 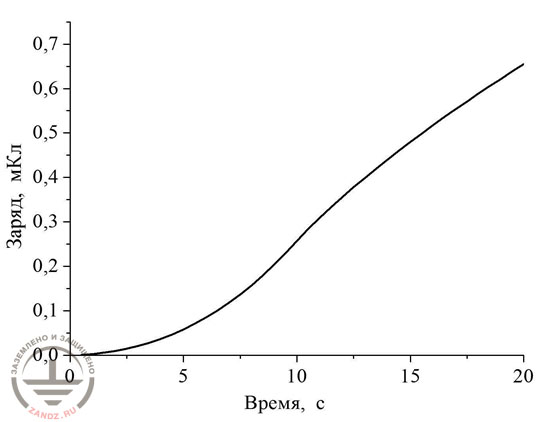 Figure 7. Charge growth dynamics, supplied by the corona from the top of the  lightning rod 20 m high in the electric field of a thunderstorm cloud, rising up to 20 kV/m in 10 seconds and not changing later

The attempts to complicate the corona system by entering of several corona nodules into it are very seductive. This approach is seen as an alternative to a sharp deterioration of corona top, which doesn't have any noticeable affect on the current of a well-developed corona. The latter had been conclusively proven analytically and by computer simulation results.