3. What is offered by companies manufacturing active lightning protection

A variety of structures of active lightning rods is united by a rather poor description of their technical characteristics, in particular those which directly or indirectly determine the effectiveness of the protective action. You will be shown a certificate, which will confirm the ability of metal structures of a lightning rod to withstand lightning pulse current of the limiting amplitude, but you are unlikely to find any data on the experimental verification of the protective action of lightning rods, their zones of protection, indicating specific reliability. For example, here is what is required for the certification of active lightning rods in France:

Only the final position of the above has anything to do with the evaluation of the protective action of lightning rods. The test procedure involves placing of two dummies of lightning rods at least 1 m in height in the interval plane-plane not less than 2 meters long. One of  the dummies (normal execution) is the prototype, and the other (active) - tested one. A constant electric field of 20 - 25 kV/m is formed in the interval, on which a high voltage pulse of 250/2500 microseconds is later applied. The moments of counter discharge branches' start from the tops of dummies are registered. Advance of the start moment from the active electrode on 10 microseconds is considered sufficient for the conclusion of its efficiency.

In connection with the final statement, there raises a number of fundamental questions, which somehow escape from attention of the supporters of active lightning rods. Firstly, it is not clear what is registered in the tests - the streamer flash or a viable counter leader. The test procedure does not provide a clear answer, since it does not foresee optical recording, and the time of launch of counter discharge is proposed to be determined on the applied voltage pulse deformation - quite a strange method for a modern experiment. Secondly, it is necessary to repeat that the start of the streamer flash does not always lead to the emergence of a counter-leader. This requires a well-defined energy contribution to its shaft. Finally, even an originated counter leader may appear to be inviable. Its development may stop in the bulk charge layer of the corona. It won't lead to the interception of the lightning channel. This has been many times observed in the laboratory and in field tests (fig. 9). 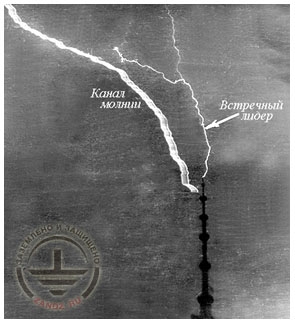 There is another factor that hinders an unambiguous interpretation of laboratory experiments. They result in part of the evaluation of the effectiveness of lightning rods significantly depends on the test model scale. For active lightning rods it may be particularly significant, because the size of the electrodes and the discharge gap decrease at the simulation, and the accumulative capacity of the internal pulse source remains nominal. We have to note once again that it determines the possible energy input to the development of the counter discharge.