1. Phases of the counter discharge development

From the series of articles " Are active lightning rods really active?".

Lightning protection - one of the engineering disciplines, where a specialist cannot do without a clear idea about the physics of the process. It majorly concerns the development mechanism of a counter leader, with which the search of simple technical solutions to improve the protection against direct lightning strikes is naturally connected. Below is a brief overview of the discharge phenomena in a counter discharge.

In a slowly rising electric field of a thundercloud E0 everything starts with the development of a non-stationary streamerless corona from the top of the grounded structure, for example, from the top of the lightning rod. The corona occurs when the tension at the radius apex r0 E (r0) reaches the threshold value Ecor providing an independent electrical discharge in the air. To estimate the value of Ecor an empirical formula of Pick is frequently used. In case of a rod electrode at normal atmospheric pressure, it can be represented as

if the electrode radius r0 measured in centimeters. It is about a sufficiently strong field of more than 30 kV/cm or 3000 kV/m. This is much more than the electric field at the surface of the ground in storm conditions E0 which in measurement is usually not more than 60 kV/m, and its average value was within 20 kV/m. The cause of the corona occurrence is a local intensification of the field at the top of the conductive ground object. For a rod electrode of height h a simple estimation gives good results

For typical sizes h≈20 m and r0≈1 cm the field of a storm cloud at the top of the rod lightning rod is enhanced by 3 orders of magnitude. As a result it is sufficient to have the field E0 the order of kilovolts per meter units in the atmosphere to initiate the corona discharge.

With distance from the top of a grounded construction the field relaxes very quickly. As a result the ionization zone is limited in size, within a fraction of a centimeter. With the increase of the field E0 the ionization zone sizes increase very slightly. In any case, the process does not look like a plasma channel growing of a counter leader, which is expected according to the Gold's hypothesis. There is a very simple explanation to that. The plasma channel can move up from the electrode only at the expense of increase of the electric field at its apex. For that, it's plasma should have good conductivity. It is provided by a high density of electrons. The counter leader channel should be growing for hundreds of microseconds and the electron lifetime in the cold air is less than 1 microsecond.

This form of electrical discharge is distinguished by the formation of quite long and thin branches. They are left behind a wave of ionization (Fig. 2). The branches launch from the common short stem. The total current of all branches goes through it. The measurements show that the branches themselves, having not recieved enough energy for its heating, remain cold and lose conductivity in about 10-7 s, but the  total current through their common stem can reach units - tens of amperes. That may be enough to warm up the stem. 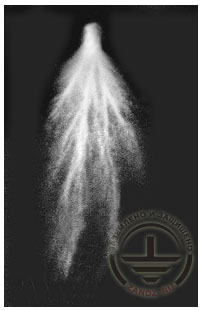 The transfer of the corona to the streamer form happens at a certain current value that is able to support the propagation of the ionization wave on the discharge interval. As it was shown analytically,  for the rod electrode with the apex radius r0 the critical current estimation may be counted by the expression

where μi - mobility of the main kind of corona ions. For typical values ​​of the apex radius (3) it comes that the transfer of the crown in a streamer shape is carried out at a current of about 10-2 A. This value is almost unobtainable for a corona in an electric field of a thunderstorm cloud. 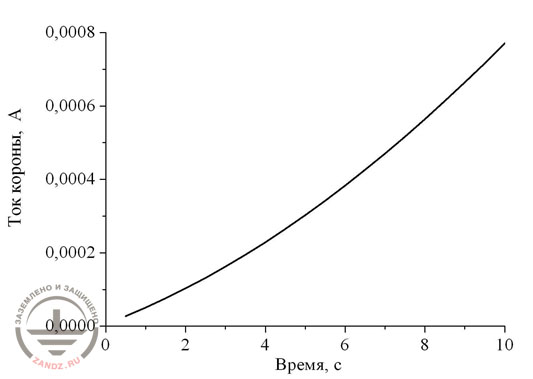 Figure 3. The dynamics of changes in time of the corona current from the top of the rod electrode 50 m high in the electric field of a thunderstorm cloud, linearly increasing to 50 kV/m in 10 seconds.

This value is almost unobtainable for a corona in an electric field of a thunderstorm cloud. Calculation results in fig. 3 show as an example of the dynamics of time change of corona's current from the rod lightning rod 50 m high. A rapid growth of a thunderstorm field was supposed, the tension of which at the surface reached the value E0 = 50 kV/m in 10 seconds. Despite the fact that the corona current was in direct proportion to the electric field growth speed, and the peak value of the latter was very close to the measured values, the maximum value of the current was still less than the critical, at least to one order of magnitude.

From the position of the problem at issue, the artificial impact on the process aimed to transfer the corona to a streamer shape is of an interest. It turns out that this problem is solved in a surprisingly simple way. The reason is that a quick surge of the electrode peak potential with the capacity Ctip to the value of ΔU leads to the corona current surge

1.3 Development of a counter leader

The content of the previous section may seem strange if we take into account that the author considers himself an active opponent of active lightning rods. Minor control action is the basis of all projects of active lightning rods. I advise you not to rush with the final conclusion and follow the fate of the counter leader after its birth. For now, we will take off the table the very moment of birth. Suppose, even unreasonably, that the counter leader was born in a stem of a streamer branche and reproduce the process of its developmen in a computer model. It is clear that we can not do without a physical model of the leader. Its detailed description goes far beyond the scope of this article. Those who are interested can study the books of E.M. Bazelyan and Y.P. Ryser "Spark discharge" (1997) and "The physics of lightning and lightning protection" (2001), where it is sufficient to restrict ourselves to a purely formal criterion of the viability of the process. The leader will move without a slowdown, if the electric field strength in the channel  EL won't exceed the strength of the electric field of a thundercloud E0. Thus, within the framework of the calculation model at each stage of the counter leader development, we must calculate its current, the resistance per unit length of the plasma channel and by multiplying these values ​​to obtain the value of the longitudinal field ELto then compare it with the field of a thunderstorm cloud, which should be determined taking into account the effect of the space charge of the corona, embedded into the atmosphere. 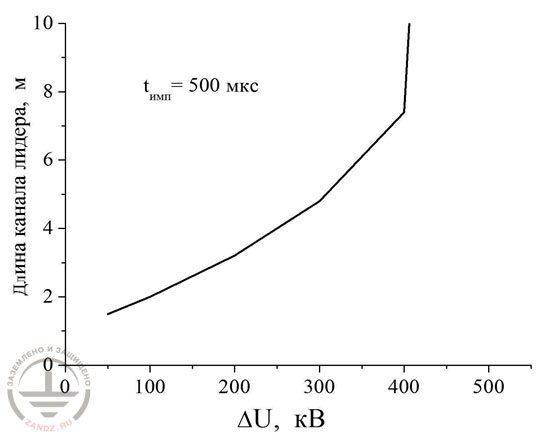 Figure 4. The ultimate length of the counter leader channel from the rod lightning rod 50 m high, depending on the amplitude of the control voltage pulse  ΔU; electric field E0 = 50 kW/m

Calculated dependence in Fig. 4 shows the ultimate counter leader channel length depending on the control voltage ΔU amplitude at which it was initiated. The calculation is performed for a lightning rod of 50 meters in height with a round head with the  radius of 2 cm (this value does not really matter). The electric field of a thunderstorm cloud linearly grew to E0=50 kV/m in 10 seconds (the field and growth speed are close to the maximum). The control pulse wasapplied in the moment when the field E0 achieved its maximum: its duration on the level of 0.5 is taken equal to 500 microseconds. It can be seen that at the control action of up to 300 kV, the counter leader channel is unable to go further than 5 m. The consequences of such a small "increase" of the effective height of a lightning rod are unlikely to have any crucial consequences. Only at the control voltage of 400 - 500 kV, the counter leader will be able to advance beyond the upper limit of the space charge layer of the corona and move without a slowdown. 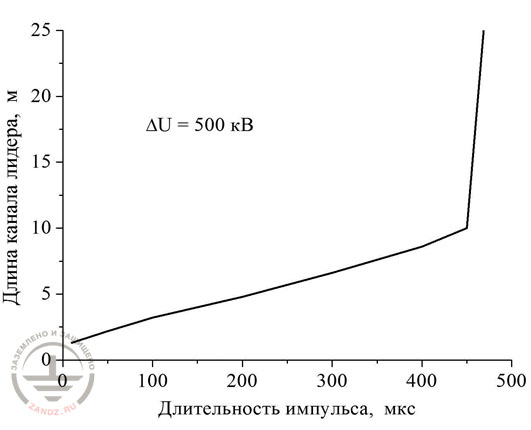 Figure 5. The ultimate length of the counter leader channel from the rod lightning rod 50 m, depending on the amplitude of the control voltage pulse with an amplitude of 500kW; electric field E0=50 kV/m

Read more "2. Energy consumption of control actions on a lightning".