The fourth webinar of a series "Grounding and lightning protection: IEC 62305 standard"

15. Transformers of low and medium voltage
16. Classification of lightning protection components
17. Magnet shielding and LEMP routing
18. Insulating surfaces
19. Grounding and bonding systems
20. Closers inside LPZ zone
21. Table of materials and dimensional sizes for shielding
22. Grid spatial shielding
23. Calculation of a safe room inside the building
24. Three types of celled shielding
25. Diagrams of values of distances from shields to objects
26. Estimation methods of electromagnetic field strength
27. Routing of electromagnetic lines and their shielding
28. Standard for signal and energy systems 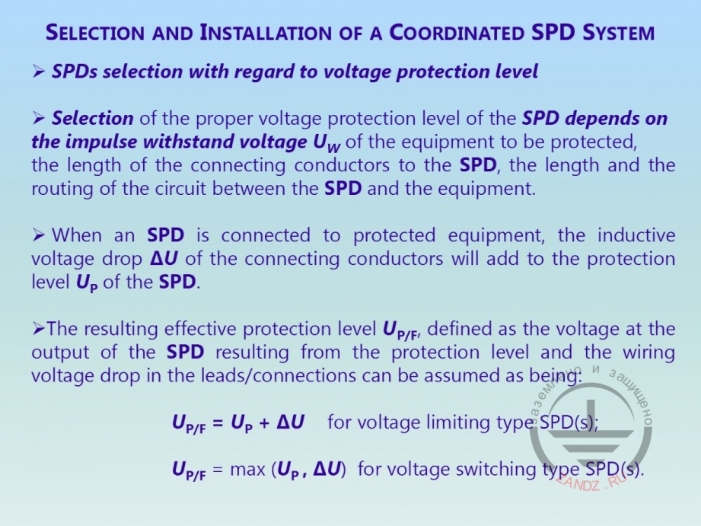 — And this level of immunity is based on the choice of systems limiting pulse voltages, which correspond to the protection level and it should correspond to the level of pulse voltage the equipment can stand. Level of equipment ruggedness should be higher than protection level. This different is not obligatory for execution, if we have additional voltage surges and drops of connecting conductors, systems of surge protective devices - it means that the values of protection level should be higher, than U delta. There are different systems of surge protective devices - limiting or switching. For a switching type, the system of surge protective devices uses. We need to remember here, that there is a nominal level of fata given by the manufacturers. And it all refers to the question or Mr. who asked about the distance in meters. 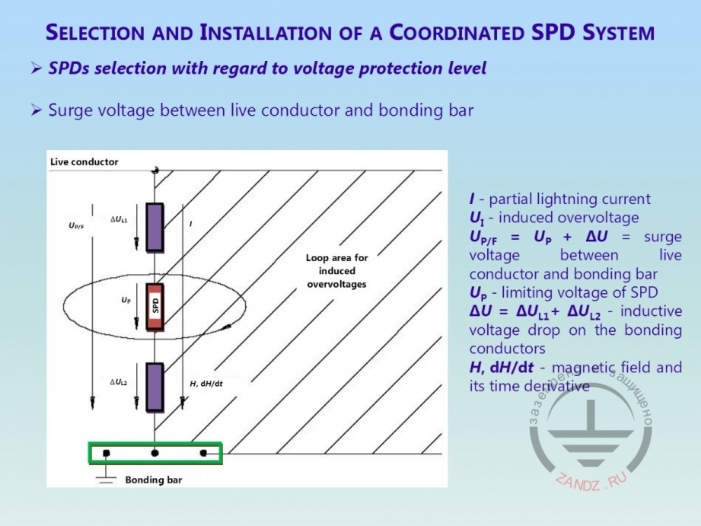 Connection circuit of a conductor under voltage and closer 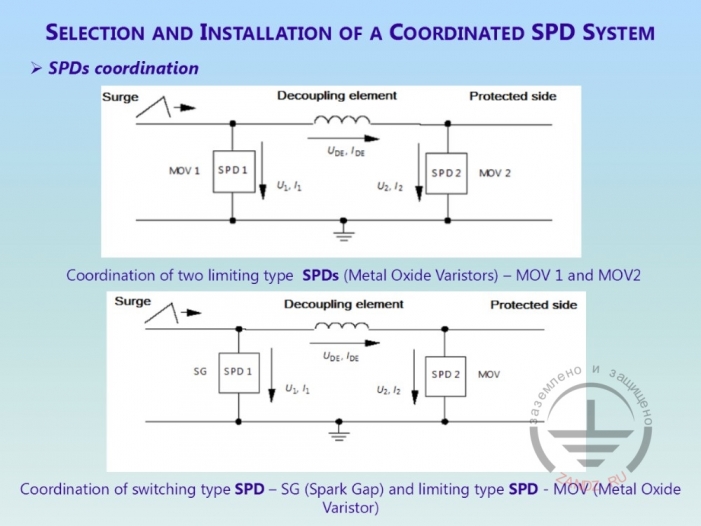 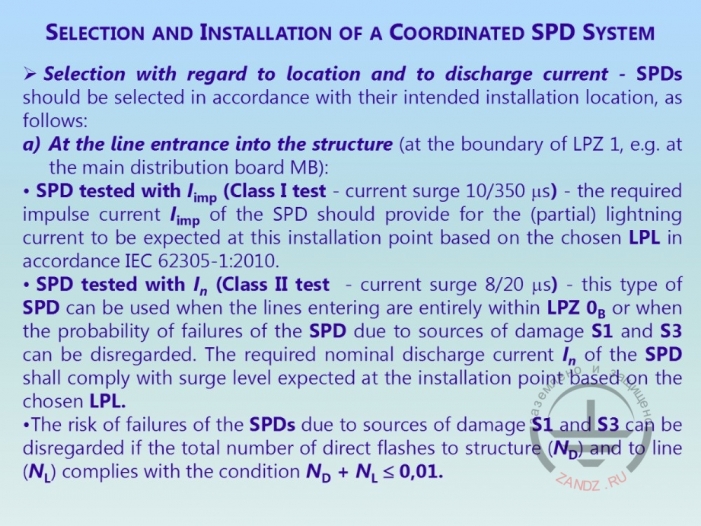 — The second question which is very important - classification of surge protection device system testing. The most complex tests are tests which are called Class 1. There are requirements in relation to the volume and current pulse, which refers to the chosen class of lightning protection level in accordance with the first part of this standard. You remember Class 1, test of Class 1 is the hardest test. Class 2, test of Class 2 is a general form created by the induced overvoltage. Here we have induced overvoltage and this test is not that hard, as the first one. Of course there is a risk of a failure. System of surge protective devices depends on the type of damage S1 or S3. S1 is threat to life or health, S3 is destruction threat. As concerns economic losses, we need consider other types of damage, but we can omit S1 and S3. Here Marek gives formulas, which you see in the bottom of the page. Here we talk about frequency, which is less than 0,01%, 1% 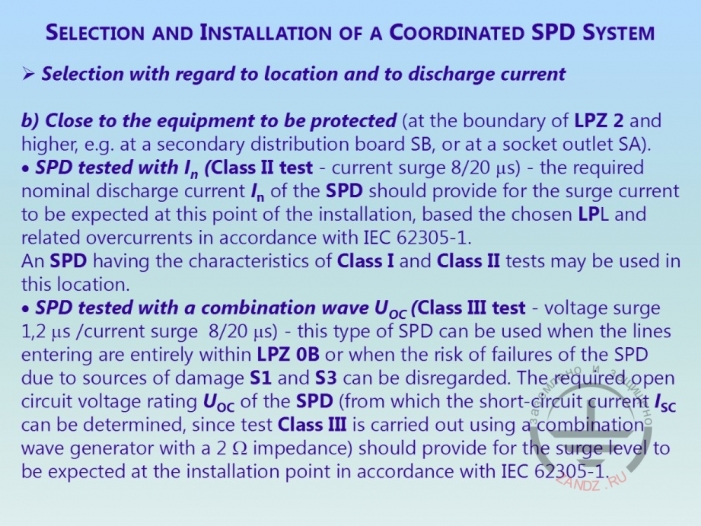 — The second part of surge protective devices system should be close to the equipment in order to reduce the risk of voltage drop, especially at the border. And the second - distributing, use of a distribution board. There is a possibility to install surge protective device system of Class 2 or SPD, which is tested by two types of classes. Also SPD which is tested with the use of a united wave - it is test of Class 3. It is a very complex formula which should be used at the construction. Cass 1 and Class 2, they can be used depending on the required protection level, level of surge protection device. And depending on the location of surge protection device system. 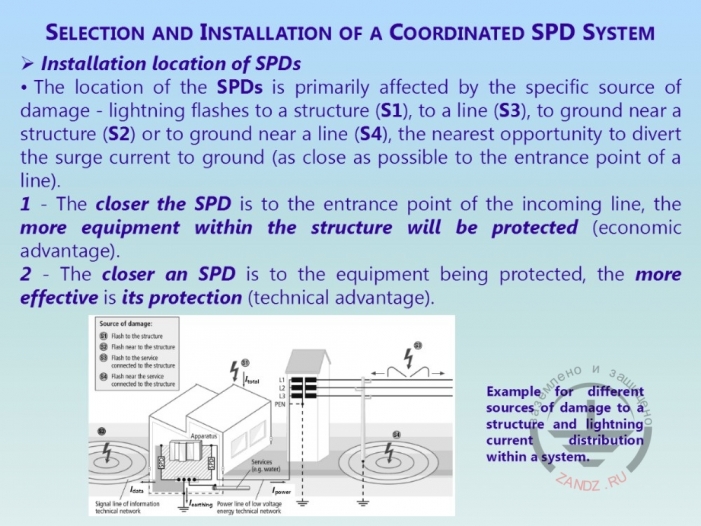 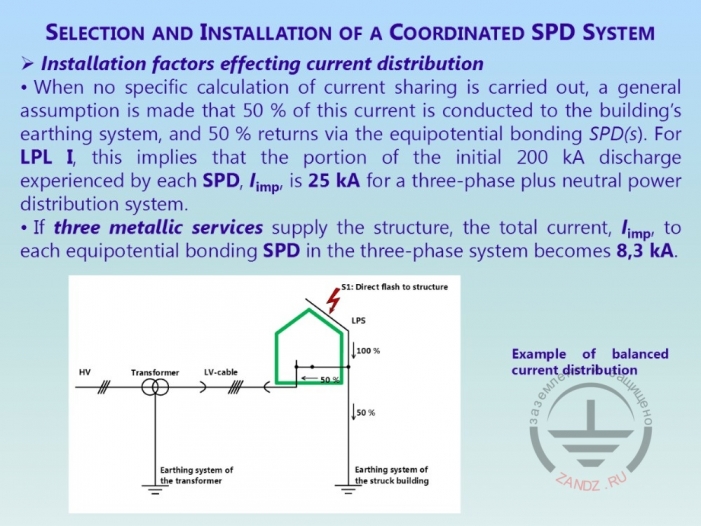 Distribution of lightning current at a direct strike

— It is very important to estimate, how lightning current will be distributed in case of a direct lightning strike into a building. For example, we have a configuration of some individual building, which should be protected and such an estimation of lightning current, lightning current distribution is very simple. We can count, that 50% of lighting current will go through the grounding system of the building and 50% will go through equipotential bonding of surge protective devices system. If we study level of protection of lightning protection 1, we need to consider such a value as 25 kA. If there are three wired services in the building, then the general current of each equipotential closer of the system of surge protective devices will be equal to 8,3 kA. 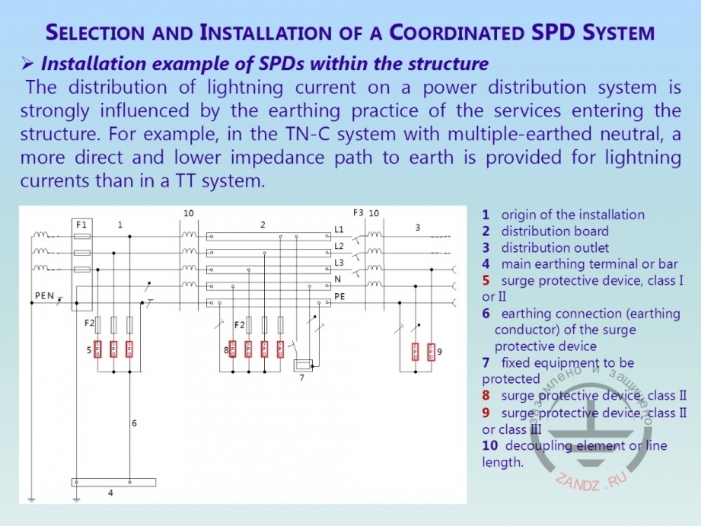 — As concerns TN-C systems, grounding systems, then there is an example where to install SPD, what SPDs can be used. Type 1 - near the building, type 2, type 3 - directly at the equipment to be protected. The installation depends on the type of low-voltage system.

— We are a bit late again, if you want, we can stop and talk about the questions on the surge protective device system. We see a question from Mr.Zakharov:" Is it possible to install SPB not at the entry to the building, but bring the cable to the protected equipment, located in the board and install SPD there?"

Let's come back to surge protective device system. Any more questions? I don't see and don't hear anything. OK. What is the weather like in Moscow? Is it sunny? That was my question.

— «If you have SPD and lightning protection zones, then SPD must be installed at the entry to the building?» 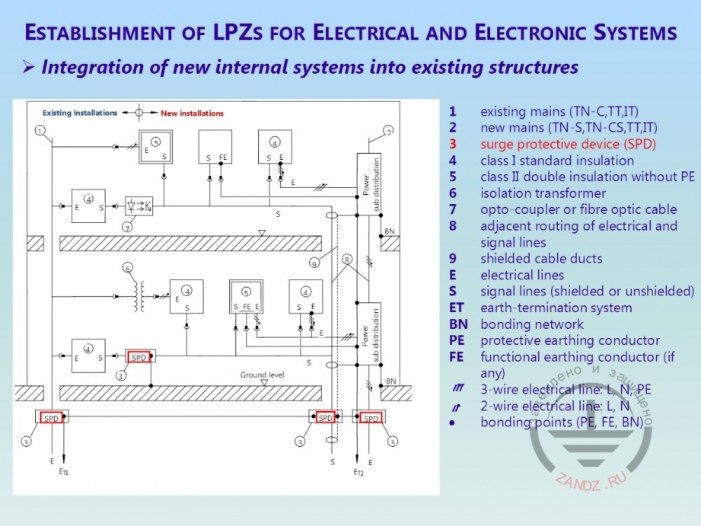 — Let's concentrate on two examples, referring to the integration of internal systems in the existing buildings. You can imagine that you may have old buildings with electric and electronic equipment and some sensitive telecommunication lines or data transmission lines and you need to integrate lightning protection system. In this case, you will have to protect the new input line which I described in the beginning and integrate. So, what we see here? № 7 is an optical isolator or optical fibre. № 6 is an insulating transformer which we insulate by the energy supply to the equipment, it is an existing transformer and № 3 is a system of surge protective devices which we need to install. It is chosen in accordance with a certain level of lightning protection. It is located at the entry to the building. That means that cases can be different. It is only one example of integration, if we update and old building. 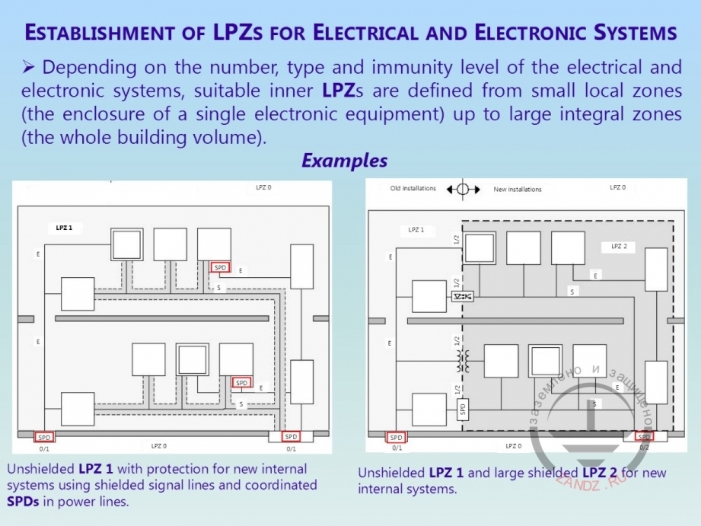 — Here are other variants how to do it. In the concept of zoning lightning protection zones. Here SPD systems are used on the inputs and lines to the equipment or they are used together with shielded cables and wiring ducts. On the second picture we see a zone, a large non-shielded zone 2 and there is SPD installed at the entry to the building or room. All installations, all lines should be shielded- signal lines, power lines. SPD here is in red colour. We also see that we need to create lightning protection zones 2. We install a shield in different rooms, on different floors of the building and we install these shields by using, for example, special coatings or metal details, constructions, fittings or by installation of metal cells. In such cases, we have a need to install SPD only at the inputs. Signal lines will be used with a separating transformer. There are shields inside it, which minimize high-frequency pulses. 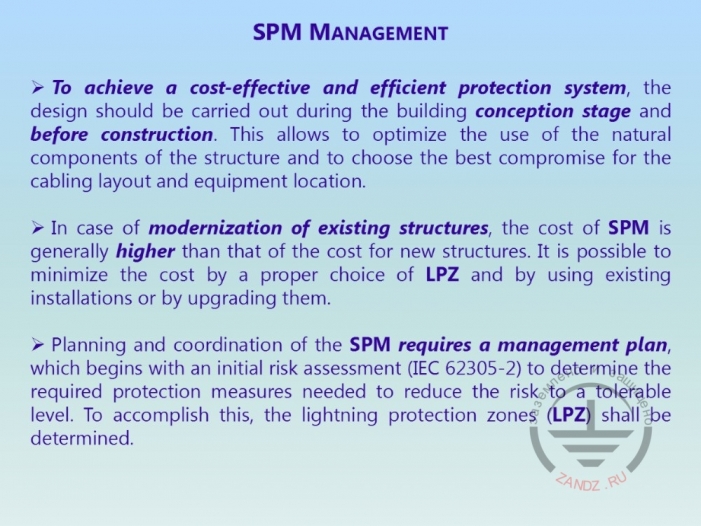 Control of measures on the limitation of surges

— And the final part refers to the control of measures on the limitation of surges. Of course, it is better to make them cheap and effective. It is easier to make it if the design is created till the construction beings, on the stage of building concept determination. And then the efficiency will be greater of course, if to design the system before the building starts to be planned. Different experts should collaborate here. But if you update the existing building, then the cost of measures on surges limitation will be higher, than for new buildings. But you know, how many practical problems you have on your way. There are special requirements on the check of the existing installations, technical data, how to update these systems and buildings. We need a plan on the organization of works, which in fact simplifies the work of designers. Do not forget about design of lightning protection zones, it is recommended. 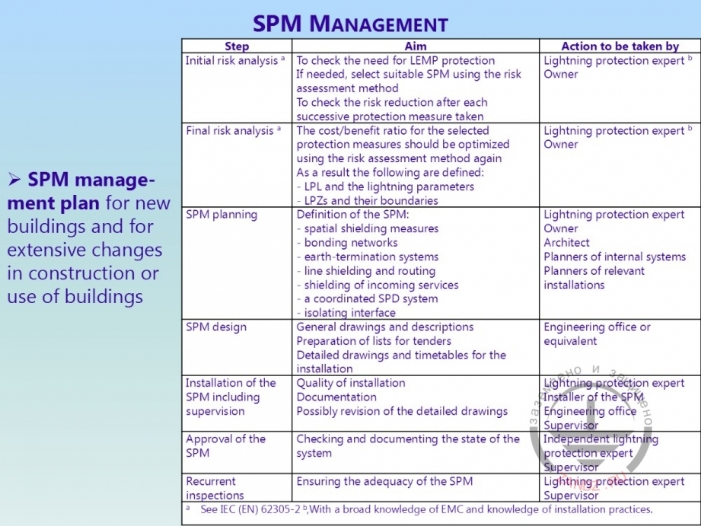 — And here there is a table, we see the steps, what actions we need to make and who should make them. First, we need to estimate the risk, estimate protection method, protection level and after that, we need to analyse the cost of chosen protection measures. Understand, what is required for the chosen level of lightning protection? Where these zones will be? Where the boundaries will be? After that, we need to define methods of shielding, grounding, potential equalization, routing of cables, systems of surges limitations, insulating surfaces, schemes, images, installation, documentation, sketches, checks, documenting of installations and determination of adequacy of chosen measures of lightning protection. And for large buildings it is most important, for special buildings, some industrial or telecommunication buildings. 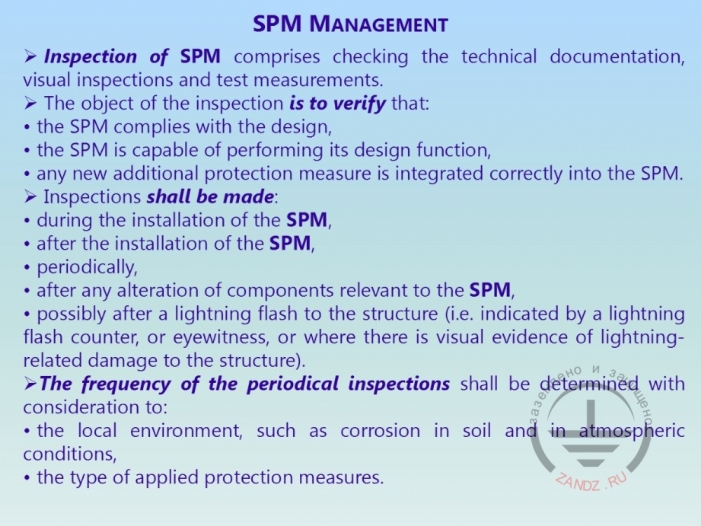 — It is a very important point - inspection of chosen lightning protection measures. Of course it should be executed, inspection should be carried out during installation of lightning protection measures. And periodically after it. There are certain recommendations on the periodicity of checks, if the owner, or the person who uses the building, the company, wants to learn the periods, they depend on certain factors. For example, some atmosphere conditions or soil corrosion and also the frequency depend on the type of applied protection measures. All depends on the individual project of installations, everything is subjective. It was the final slide I wanted to show you. 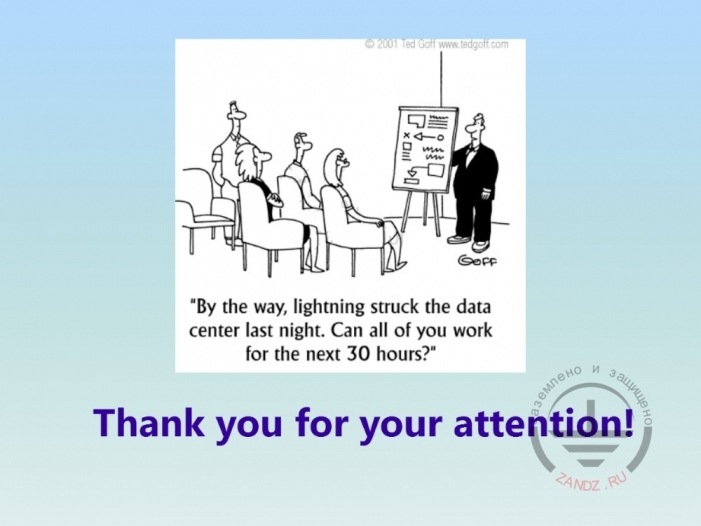 — It is a joke, it is written on the picture: the lecturer says:" By the way, a lightning hit out database, can you work 30 hours more, please?" I hope you won't have such a situation very often. It's a joke. Thanks very much for your attention. If you have any questions, I can of course answer them. One question from Mr. Norenko. Please give me time to read it. The question refers to the requirements of resistance of functional grounding. Of course, they depend on the type of installation, type of equipment. Usually, when we have a substation, electric substation inside the building or near the building, then the value of the functional grounding depends on the power of the transporter. There are requirements; they are given in this standard. There is a system of functional grounding, if is should execute requirements of lightning protection, then it is necessary to execute both requirements and you remember that there are requirements for electric installations, which refer to the safety from electric shock.

I thought the presentation would be 1,5 hours, but it lasted longer, sorry, but I tried to give you as much information as possible. I want to thank the interpreter and Alexey Korytko and other organizers of our webinar, who offered me to organize this webinar. Thanks you very much. I hope we will have a chance to meet on the Internet or even personally. If you have any questions please do not hesitate to contact me and send me emails. Thank you very much, best regards!