The fourth webinar of a series "Grounding and lightning protection: IEC 62305 standard"

We recommend watching with the quality of "1080p" in a full-screen mode.

Energy from a lightning strike may achieve hundreds of mega joules, while milli joules are enough for the sensitive electronic equipment to fail in electric and electronic systems inside the buildings and structures. Therefore, additional measures are needed to protect some pieces of the equipment. Electrical and electronic systems are increasingly exposed to the electromagnetic effects of lightning, which leads to significant costs. Such electronic systems are used in information processing and storage, as well as in process control and safety at complex, large and capital-intensive industrial facilities (where downtime is undesirable for the reasons of cost and safety).

During this webinar, we plan to study the types of damage for electrical and electronic systems and determine the means of their protection offered by IEC 62305:

15. Transformers of low and medium voltage
16. Classification of lightning protection components
17. Magnet shielding and LEMP routing
18. Insulating surfaces
19. Grounding and bonding systems
20. Closers inside LPZ zone
21. Table of materials and dimensional sizes for shielding
22. Grid spatial shielding
23. Calculation of a safe room inside the building
24. Three types of celled shielding
25. Diagrams of values of distances from shields to objects
26. Estimation methods of electromagnetic field strength
27. Routing of electromagnetic lines and their shielding
28. Standard for signal and energy systems

— Good afternoon, dear colleagues! We are delighted to welcome you at the new webinar dedicated to lightning protection design. And the topic of the webinar today is "International electro technical standard IEC 62305, part four". It is protection of electrical and electronic systems inside the buildings. Our irreplaceable lecturer - Dr. Marek Loboda from Poland will make the report today. Marek is the author and co-author of more than 150 publications on the topic of lightning protection and is a member of the implementation of IEC standard. So if you have questions on design or IEC standard, you can ask the expert in this sphere directly. I am Alexey Korytko, and I am the administrator of this webinar. And first of all, a few words about the order of our event, how it will be held. The webinar is 90 minutes and consists of 4 blocks and pauses between them for questions and answers. You can send your questions on how to adjust the sound in the chat on the bottom left of the screen. You will need to adjust the sound to hear the lecturer and the interpreter well. For that, when Marek- the lecturer and the interpreter switch their mics on, there will appear the icons on the top left, and if you point at them, there will appear the regulators. We recommend you to set the interpreter's volume level to maximum - 80 or higher to hear Russian speech well, and the level of Marek's volume - to 20 or lower. It is to hear Russian speech well. It is possible to adjust the volume in real time mode, so you won't have problems. If you have any questions on the connection, adjustment of sound, you can send them to the chat and I will answer them. If there are no questions, we can start the main part. Marek, I give you the floor. 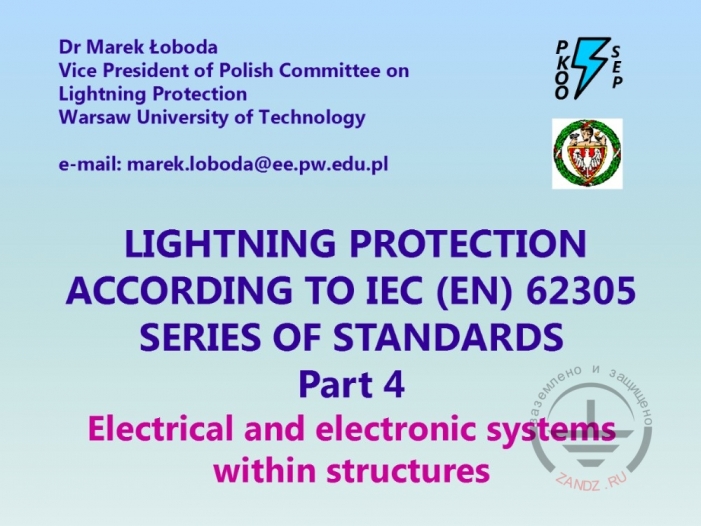 — Thank you very much, Alexey, for the presentation. Good afternoon to all the webinar participants. I would like to talk about protection measures from electromagnetic impulse of electronic and electric systems, which are located in different types of buildings. 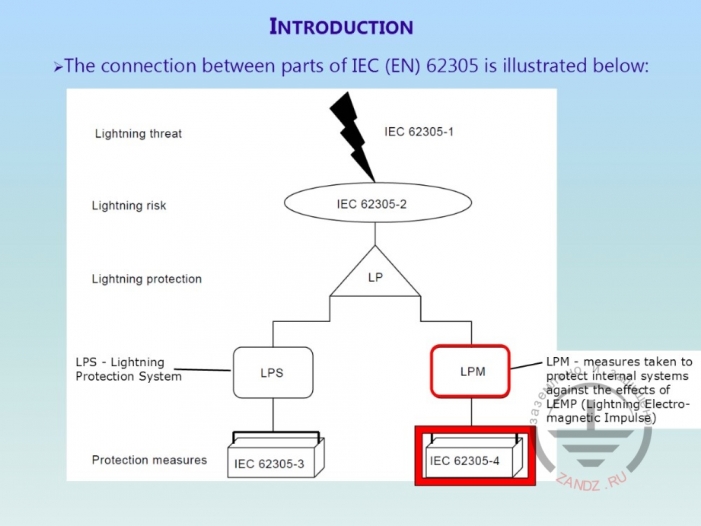 — The characteristics of the standard includes - it is the third part of IEC 62305 standards, European standards. And the final part of this standard series is the fourth part. 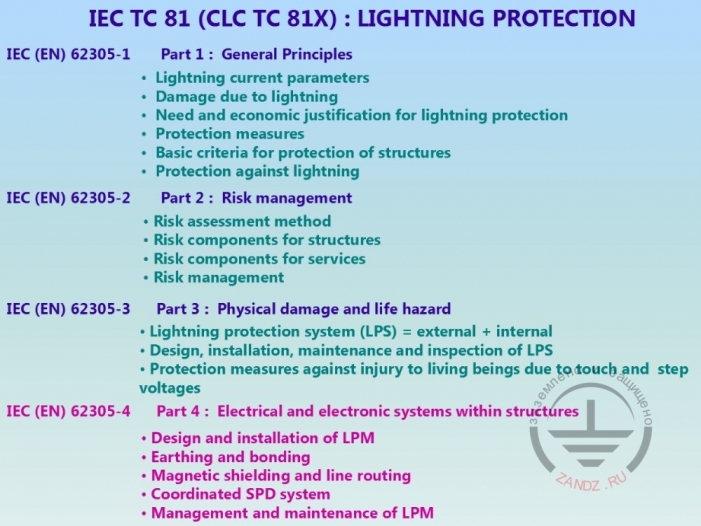 Main series of the standard 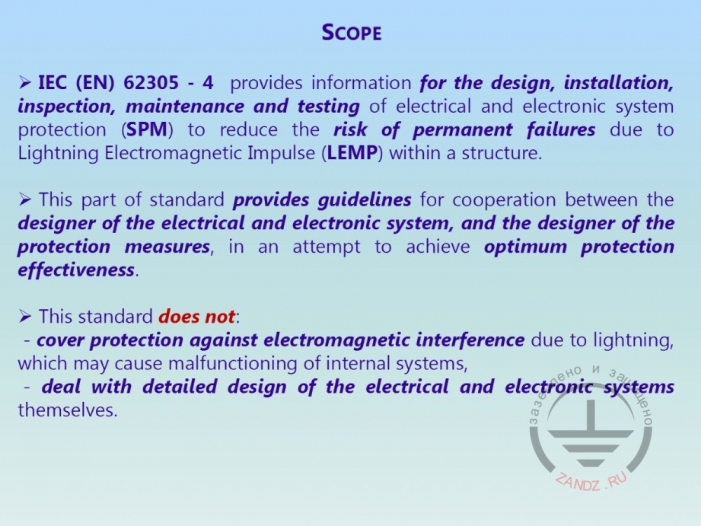 General Information about the fourth part of the standard series

— Let me now say a few words about the fourth part of the standard. This part presents information on design, installation, inspection, maintenance and testing of electronic and electric systems, SPM. It is strange that SPM abbreviation is used in the English language, but it means lightning protection measures, and LPM is electromagnetic impulses. The fourth part presents guidance on collaboration between the designer of electrical, electronic systems and designer of protective measures aimed to achieve optimally effective protection. It means external and internal protection measures. 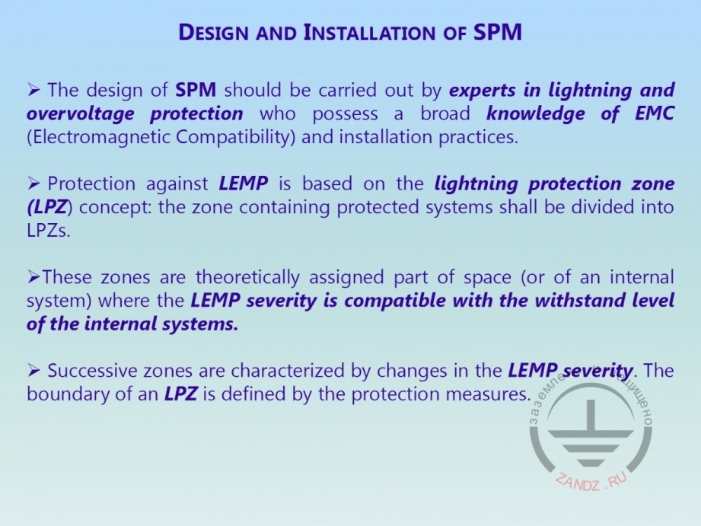 — Unfortunately, this part of the standard doesn't cover protection against electromagnetic disturbances from lightning strikes, which may bring to the failure of internal systems. It is quite a specific topic and it is described in other standards, European standards on electromagnetic compatibility. And this standard doesn't present information on electric and electronic systems. It means, that design and construction and testing of electric and electronic systems, they are usually covered in protection standards or individual product standards. 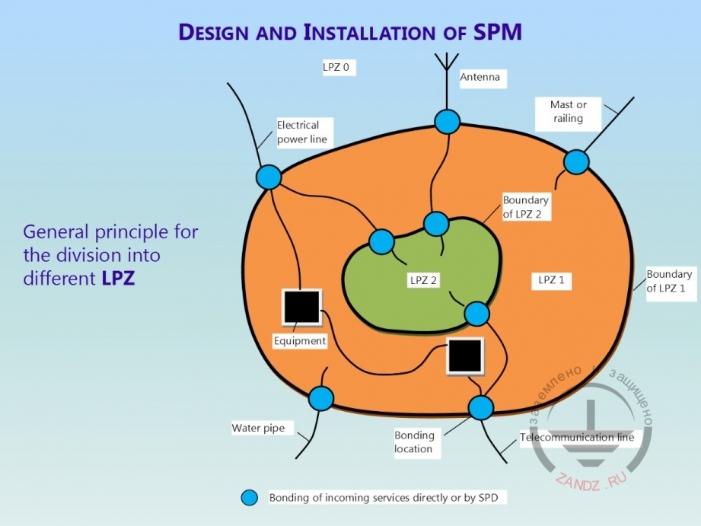 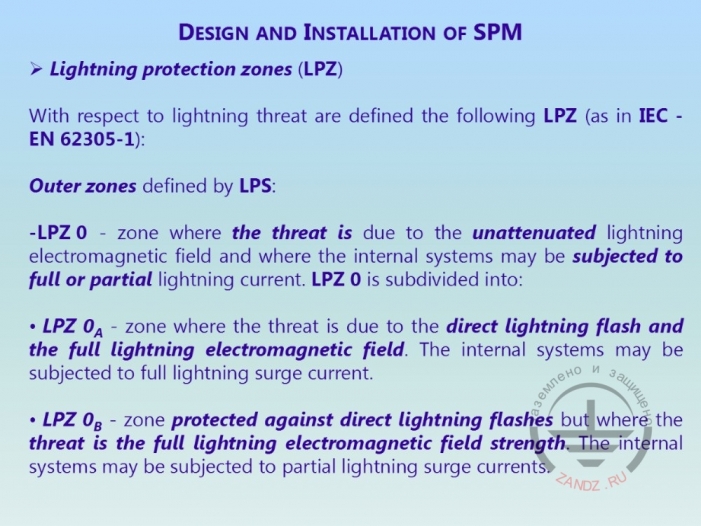 — On this picture you see a general explanation of zones concept ideas - zoning. If lightning strikes into a building, it is necessary to include overhead power lines, pipeline, antennas, some other systems, telecommunication systems into the zoning - it all depends on the case. We gradually should reduce the power of influence of a lightning strike and electromagnetic impulses. For example, in zone one or outside the building, the force of electromagnetic impulses can be different. 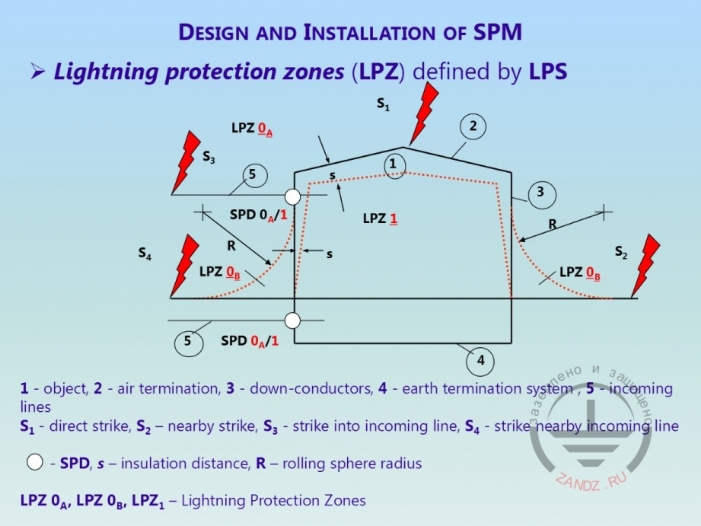 Determination of protection zones 0a and 0b

— There are definitions of lightning protection zones. They are the same like in the first part of the standard IEC 62305, but the definitions refer to lightning protection system that is why, we need to say that there are zones where electromagnetic field is non suppressible. In order to minimize the effect of a lightning strike, we classified these zones. Zero zone, zone 0a and zone 0b. Zone 0a, when a lightning strike happens in it, an electromagnetic field is created in it, but the systems in this zone are protected, and in zone 0b - internal systems can be subject to a partial lightning current. There is a whole grounding system in such a system, but the force of electromagnetic field is not much suppressed. On the next picture we see explanations. Here you see zone 0a and zone 0b. It is inside the protection zone, which is formed by the grounding system. Here we can indicate places into which we divide these zones. And on the borders between these zones, we need to install certain additional lightning protection devices. 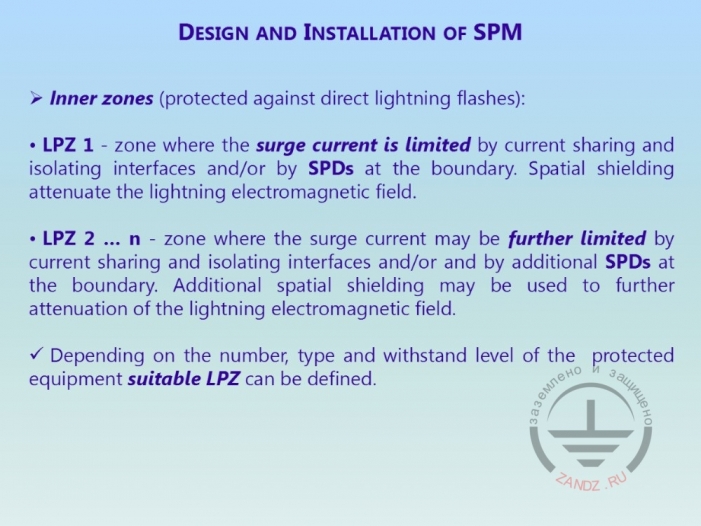 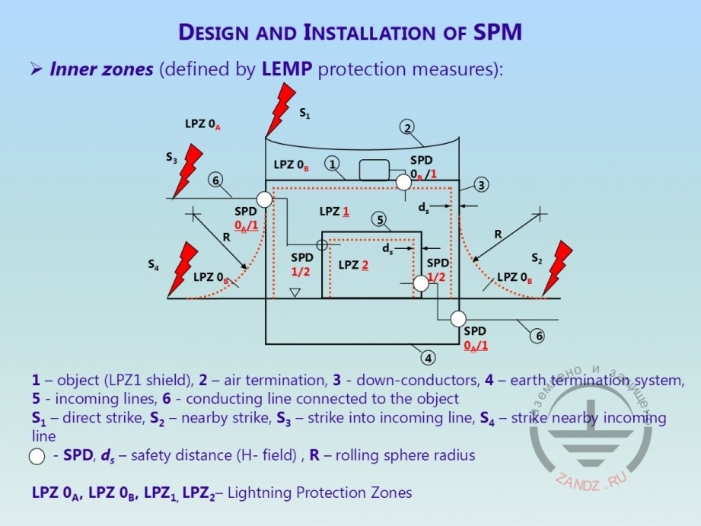 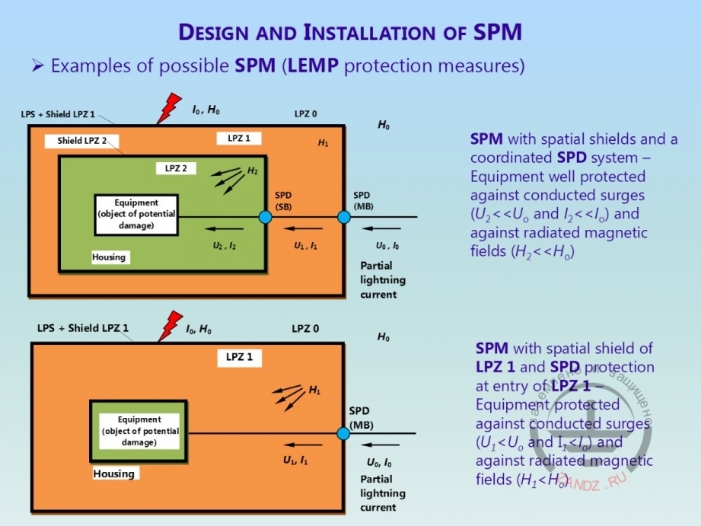 — The general idea was not explained, but now we need to deepen into the details and see what we have in each individual case. Because each building should be individually protected, individually designed and analyzed from the size of lightning protection issue. In case, when we have spatial shielding and coordinated systems of surge protective devices, you see, they are in blue on the picture-two zones of impulse voltage limitation and in the middle the white square is protected equipment. At the border of each zone, we have a correlation between the value of the expected overvoltage from partial lightning current. It should be less than zero and also the length of the distance of the incoming line which goes directly to the protected device is important. On the second picture, which is located at the bottom, we see another variant. It is also equipment protection measure which is subject to a potential damage from a lightning strike. 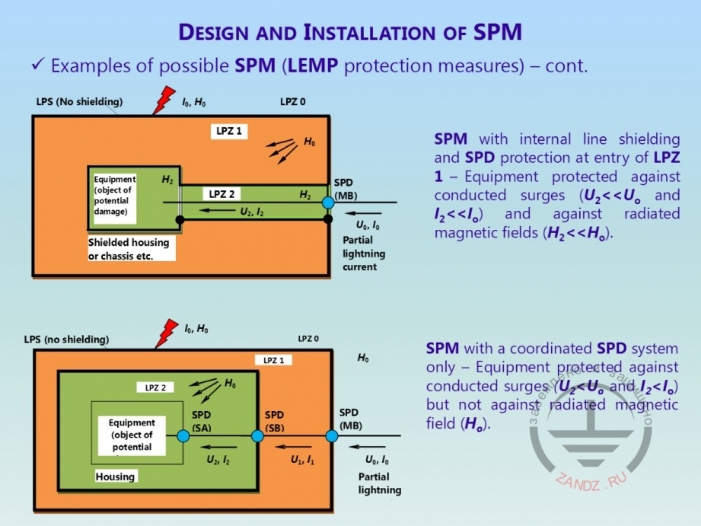 — There are two different variants. The third example is very important and is very often used, when we have a chance to make a line, if we have a shield or some natural shielding of the incoming line. Here we can lengthen lightning protection zone 2, which is in green to the border of zone 0 and zone 1. In this case we can install only one system of impulse voltage limiters and the shield is created by the conductive elements of the external shield, and when we have no shielding possibilities, we gradually install several limiting systems in certain places. -Let's call them - electronic installations. They are on the way to the protected equipment and gradually approach it. Here we don't have a possibility to use external shields, but we use the chosen systems of impulse voltage limiters. We'll be talking about them. I'd like to stop in this part of the presentation. I hope you have some questions referring to the concept of lightning protection zones. Please don't be shy and ask them, I will gladly answer them before we start talking about the fourth part of this IEC standard. Please write your questions in Russian, I hope I will see them in the chat. Is it clear? There are either no questions, or we don't see them. Ok, then I will continue, if you don't mind. 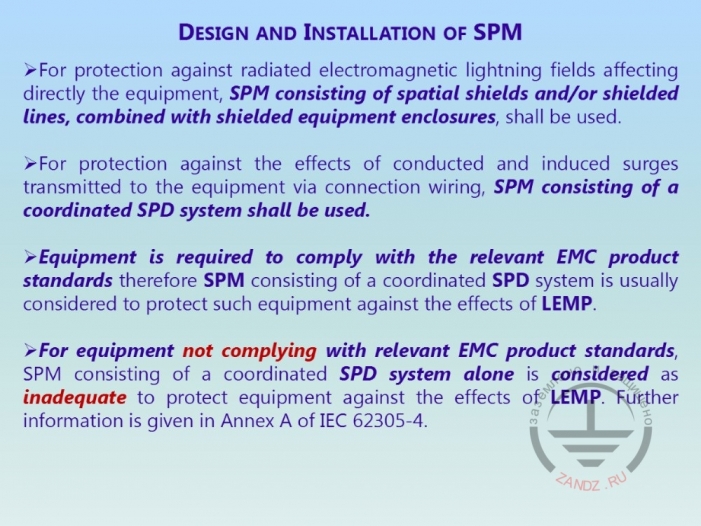 — The next part of the presentation refers to the design and installation of impulse voltage protection measures. It means that we need to keep in mind the protection from the dispersed electromagnetic field, which can directly influence or damage the equipment. These measures should consist of shields, spatial shielding or shielded lines, which can be connected with the shielded equipment. It is necessary to remember that impulse voltage effects protection can also transfer to the equipment via connection wires. And in these cases we need to use impulse voltage limiting systems, coordinated systems and also protected equipment should correspond to the required standard of electromagnetic compatibility. I've mentioned them, they are based on the European standards and IEC standards, they relate to certain products and are mainly used in houses for telecommunications. And they are used for certain aims, which help to increase resistance and immunity of electronic equipment.

— If I can stop here, because there are some questions, let's stop. Before to start the next part of the presentation, I will read the questions in Russian.

— Mr. Zakharov is asking. I understand Russian, so I will read them, give me time. SPD- surge protection device system? What do you mean saying SPD? If you have internal lightning protection system, which consists of shielding, we can also use additional lightning protection measures, using limiting systems of impulse voltages. Here you see examples of possible installations, you see four cases here. I'd like to show you the third example; it is on the top of this picture. In this case, when one system is used, only the system of impulse voltages without shielding is used. If it is used for a building, for a part of the building or for whole buildings, then in this case we can use only the system of limiting impulse voltages. Their installation should correspond to the requirements of resistance, described in the standards. 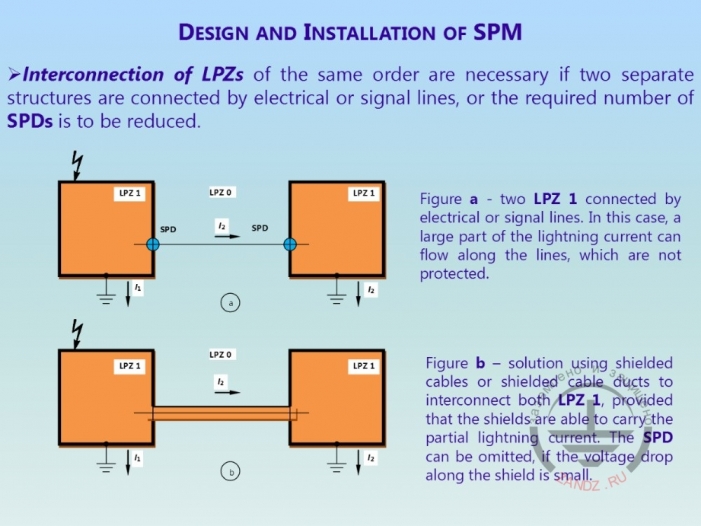 — Additional information, will be given later, let's talk about it later. Here on this picture you see examples of lightning protection zones connection. We often face situations, especially in the city environment, when there are several buildings near each other and they can be connected by telecommunication lines or power supply lines. And here we see how to protect these buildings if we have lightning protection zones between these two buildings. Zero 0, you see it on these two pictures. On the first picture, we see two LPZ 1 zones, it is created between two buildings, they are connected with a line, which is not shielded and the system of limiting impulse voltages is put on two borders, on two ends.