From the series of articles "Lightning protection of residential and public buildings - answers to frequently asked questions in the design".

The overwhelming majority of such impacts is determined by the influence of the electromagnetic field of lightning either on power line wires of the protected building or on the electrical communications in its internal volume. From the point of estimation of hazardous electromagnetic influences, the line type is of fundamental importance. In the ​​modern urban area, energy supply of residential buildings, as a rule, is carried out through an underground shielded cable from the nearest substation. The level of active pickups is minimal here. It is often simply not taken into account due to a very low probability of hazardous exposures. Any significant pickup is excited only when the lightning current entirely gets into the shell of the underground cable. In the field of cottage and suburban development it is preferable to use air line 380/220 V. Unfortunately, insulated wire (SIW) have been recently introduced into operation in Russia, they have little difference in interfacial distances from the traditional underground cables. Contour area between the wires, pierced by the magnetic field of lightning is very small, respectively the induced electromotive force of the magnetic induction is small too. Only a direct lightning strike into the line poses real danger.

Unfortunately, the majority of overhead lines 380/220 V are still maintained in the traditional version with bare wires. The distance between them can be d = 0,3- 0,5 m. Given that the length of the line lHVL from the protected building to its substation can reach several hundred meters, contour, pierced by the magnetic field of lightning, s = lHVLd is counted by tens of square meters. It is a very serious induced voltage UEM even from relatively distant lightning with the average distance r from the line (Fig. 1) 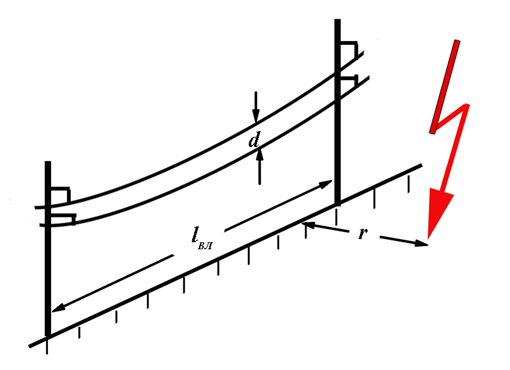 Elementary approximate estimatation of the induced voltage can be carried out according to the formula (1).

The parameters of the lightning current, including its growth rate randomly vary within about 2 orders of magnitude. The maximum value of this parameter in the regulation IS-153-34.21.122-2003 is taken equal to 2 × 1011 A / m. The use of such a large value in the task of estimating the effective value of the dangerous effects of lightning would lead to unreasonably high result. We will use a smaller, but much more probable value of 4 × 1010 A / m. Its substitution into the formula for the line section of 200 m (average distance from the house to the transformer station) makes it possible to determine that the voltage UEM = 2500 V is definitely dangerous to the internal electrical network at home, lightning of averaged power will arouse at the averaged distance from the line r ≈ 170 m (assumed that the distance between the line wires d = 0,4 m).

The conclusion is somewhat unexpected - for individual buildings of relatively small height and area, powered by the overhead line (VL) of conventional version with bare wires, not a direct lightning strike presents itself a more probable danger but induced overvoltage induced in this line.

The most effective way to limit the induced overvoltage comes from the formula (1). For that, it's enough to dramatically reduce the distance d between the wires, which is implemented on the lines with SIW. Their use reduces the induced lightning surge current in 10 - 20 times, making them practically safe. In fact, the danger of lightning is here related only to its direct impact on the line. At the height of the wires on overhead line supports hHVL area of lightning contraction on the length lHVL (taking into account its two bands) is on average equal to:

This way, the use of overhead lines with SIW should be considered effective against lightning surges on VL 380/220 V.

Peculiarities of remote lightning effects on the large high-rise buildings

Power supply of multi-storey buildings, as a rule, is carried out through underground cable lines. Excitation of induced surges in them from any remote lightning strikes is unlikely. It is necessary to consider the lightning current spreading over metal structures of the building, including the shunts as the real source of surges. Overvoltages induced in the phase conductors of the HVL powering the substation should be taken into account. They can enter the low side of the transformer through capacitive coupling between the transformer windings. However, in reality this path is covered by protective means mounted directly on the substation. Specialists on external lightning protection have no need to deal with them.

The task about the frequency of hazardous effects on the multi-storey building comes down to the estimation of the number of direct lightning strikes. It has already been shown that for residential and office buildings, the occupied area of which on the ground surface is relatively small (this is true with very few exceptions), their height has a decisive importance. In the limit of the expected number of strikes is proportional to the square of the building height. That is why the expected number of direct lightning strikes for high-rise buildings is counted in units or even tens per a thunderstorm season. An elementary estimation can be easily made by the expression (strictly it is valid for the towers with a small foundation square)

Read more "What must be protected against direct lightning strike".