Lightning protection of churches and temples

A real example of calculating lightning protection for the church is on the separate page.

Thus, taking into account the above-listed architectural features of these religious buildings, we determine the following distinguishing characteristics of these objects: 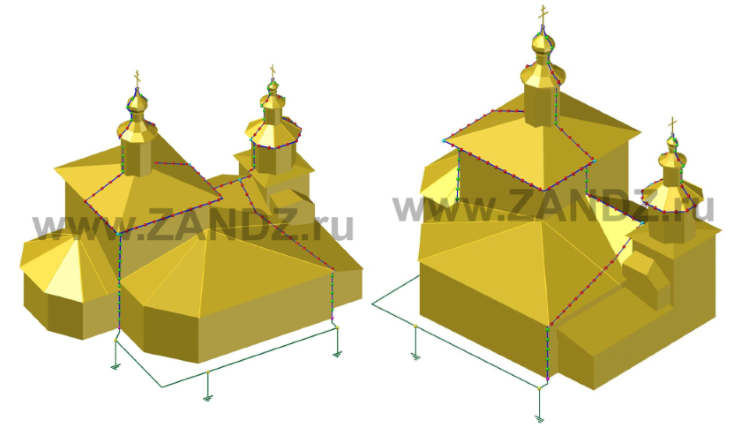 Recently, "modern" solutions for the manufacture of crosses and domes began to appear more and more often, namely made of fiberglass or other composites based on reinforced carbon with the further deposition of titanium nitride ("fake-gold-look"). Such structures are considered non-conductive, and the organization of the lightning protection part of lightning protection is solved either at the stage of manufacturing structural elements, or by building external (including stand-alone) lightning-rod system, as in the case of wooden structures.

How to make lightning protection of churches and temples

Solution for a lightning detector

The use of the cross, the crescent and the symbols of other religious denominations on the temple spire as a lightning rod is possible if:

In order to properly design an external lightning protection system, the specialists make down conductors from crosses (or from metal structures supporting them) to a grounding device.

In addition, in accordance with the standards of IS and AD, it is necessary to determine the protection zones from possible lightning strikes to check whether the volume of the structure is completely protected by such a natural lightning rod. In case of insufficient protection zone, the issue of additional installation of air-terminals masts, or, possibly, use of a lightning protection mesh the dome of the temple is solved. Protective zones are defined by the "protective angle" method (see 3.3.2 of the IS). If the temple has multiple domes, each dome should have its own lighting rod. On the level of down conductors, traversal coductors, starting from the zero level, in every 15-20 m unite the lightning rods into a single system of lightning protection.

Other parts of the cult structure (see 3.2.1.2 IS) can also be used as natural lightning rods, for example, the roof of domes and the roof of the temple, made, as a rule, of metal. This requires compliance with the following factors:

For wooden churches with conductive crosses and domes, lightning rods are made in the form of a rod construction fixed to the cross with the help of insulating fasteners or staples, less often in the form of separately standing mast lightning protection systems.

Solutions for down conductors

At least two down conductors must go from each lightning rod to the ground electrode. For the most uniform spreading of lightning current, it is recommended to make a current-collecting system, which is uniformly located around the perimeter, as a rule, at the corners of buildings. For temples having a fireproof frame, the down conductors are fixed directly to the walls of the building (it can be used under plaster), as well as natural down conductors in the form of metal constructions bodies made of prefabricated or monolithic reinforced concrete. The minimum cross-sections for the organization of lightning protection system are from 16 mm2 (copper) to 50 mm2 (steel).
For flammable structures of temples, down conductors are attached to insulators, or to metal clips clamped into the frame of the building at the distance from the wall surface of at least 0.1 m (see Fig. p.3.2.2.4.IS). Down conductors should be isolated from human touch within the limits of accessibility in height.

Grounding for religious buildings is usually carried out according to the schemes intended for ordinary civil structures: in the form of a closed loop at the depth of at least 0.5 m and at the distance of at least 1 m from the perimeter of the building, the grounding resistance should not exceed 10 ohms. However, calculations show that even the grounding performed according to the AD norms gives a "step voltage", with the ground resistivity from 500 to 1000 Ohm * m, exceeding 50 kV, with a lightning current of 30 kA. For places of high concentration of people, such as churches and temples, this causes a risk of electric shock, including from touching of non-isolated parts of down conductors. Therefore, at the distance of 3 m from the walls of the building, along the perimeter, it is recommended to perform a protective coating of asphalt, gravel or other dielectric material in the area of ​​the grounding contour. For the most reliable grounding, it is possible to use deep ground electrodes based on prefabricated modular systems with Isolated down conductors. Lightning protective grounding, as a rule, is performed in combination with a protective (working) one. To ensure the safety of parishioners and clergymen from the existing electrical installations, protective grounding and a system of equipotential bonding are used.

In this cult buildings crosses serve as lightning rods. The Archangel Michael Cathedral (Archangelsk city)-the air terminal mast is located at 3 m above the highest point of the temple and provides a protective zone to the radius of not less than 36 m, the historical-architectural reserve Kizhi-standard protection of "wooden church architecture ".

We hope that our materials will help you when designing lightning protection even for complex objects, such as temples and other places of worship.