This term, taken root in lightning protection, is unlikely to decorate the Russian language. For the experts,it is pretty clear. The question is about transportation of high voltage aboveground and more often underground utilities connecting surface structures. If one of these buildings is high-rise, it quite often sends high voltage waves to the neighboring buildings. As an example, the calculation results in Fig. 15 show the dynamics of time changes of voltage transmitted through the pipeline with a diameter of 0.1 m to the distance l=200 and 500 meters. It was assumed that the ground electrode system of the building, which was struck by lightning, has grounding resistance of 4 ohms, and the pipeline is laid in the ground with the resistivity 500 ohm m to 0.5 m depth. 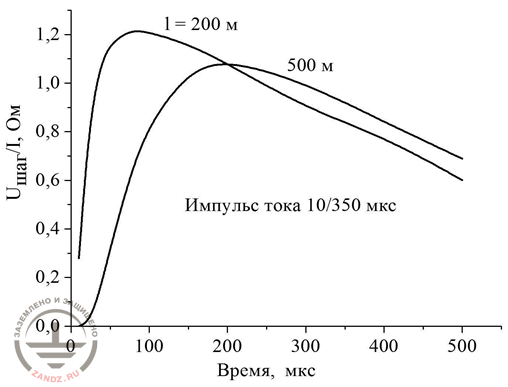 Fig. 15. High voltage wave at the distance l=200 and 500 m from a lightning strike into the building with grounding resistance of 4 ohms. Underground communication with a diameter of 0.1 laid at the depth of 0.5 m in the ground with the resistivity of 500 ohm*m.

You can see how slowly the pulse transported over the pipeline fades. Even in 0.5 km its amplitude at the current of 100 kA is still higher than 100 kV. Such a high voltage cannot be ignored in the design of lightning protection of neighboring buildings. Even in high conductivity soils, where the current leakage is to significantly and quickly deformate the impulse transported through the pipeline, it can still travel to considerable distances. Computer calculation results in Fig. 16 confirm the said above. In the context of the previous example, change of soil resistivity to 200 ohm m reduced high potential amplitude approximately by half, which not so radically changed the risk of remote lightning impact on humans and animals.

8. Technical equipment on the roof

Maybe lightning protection specialists will be able to convince the designers that the roof of high-rise buildings is not the best place to put the climate control machines, antenna systems and other expensive technical units easily damaged by lightning. The possibility to use large space is very tempting. Appeal to domestic standards of lightning protection will hardly help to choose protection means of everything that is installed on the roof. In any case, lightning protection mesh is completely useless here, which is prescribed by AD 34.21.122-87 to be placed on (or under) roof insulation coating. The effort to use lightning rods on the roof also won't bring special joy, if to follow the provisions of AD 34.21.122-87. According to the rules of this standard all the height should be measured from the ground surface. With this approach, a lightning arrester on the roof of a high-rise building must have a very large excess over the object, which is also mounted there. Here domestic rules are fundamentally different from the requirements of IEC 62305, because according to it, such heights should be measured from the roof surface. It is natural to ask who is right. This question has no absolute answer.

It is clear that in determining height the conditions of the emergence and development of a counter discharge from the top of the lightning rod should be properly reflected. It is also clear that these conditions are determined by the structure of the electric field in the vicinity of the peak. If so, then it should all depend on the position of a lightning rod on the roof. When it is located at the edge, the requirement of the national standard is closer to the truth. The field at the top of the lightning rod is really determined by the total height of the object and the lightning rod. Lightning rod in the center of the roof when the distance to the edge is several times greater than its height, in magnitude and structure of the electric field is much closer to that characteristic for the ground installation. And the larger is the size of the roof, the more just is this assertion. Computer calculations of the electric field intensity at the tip of the lightning rod in virtually all important situations are not a problem. It is created by simple engineering recommendations for the selection of a particular scheme for calculating the height of lightning rods. There is no simple and compelling solution here yet. The current version, introduced into AD 34.21.122-87, was chosen because its use under any circumstances gives headroom height for a lightning rod. The only pity is that it is difficult to assess the extent of this headroom and be sure that it is not too large.