From the series of articles "Lightning protection of oil and gas facilities".

3.1. Physics of the process

We should not think that we are talking about a recently discovered phenomenon, which the specialists are not much aware of. Spark breakdowns of the surface soil layer are described in the monographs of the first half of the XX century and are very well known by the operating personnel of long-distance underground cable lines that have been actively used at that time. The channels were launched from the insertion point of the lightning current to the ground, for example, from the tree roots, and extend to a length of up to hundreds of meters, gliding along the soil surface. Getting into the communication cable, they damanged it and became famous because of that.

Laboratory experiments surprised with a low voltage, which was required for the formation of sliding spark channels. Photo in Fig. 17 obtained during the studies of spark channels of 5 m in length, when the power supply voltage was only 135 kW. In a field experiment, domestic experts (All-Russian Scientific Research Institute of Experimental Physics of the city of Sarov) observed spark channels of up to 30 m at the voltage of 300 kV. For the same purpose in the air a higher voltage would be required. It turned out that it's all the fault of the current leakage into the ground through the side surface of the plasma channel. They keep its temperature at the level of 5000-6000 K and thus do not allow to lose high conductivity born in plasma. The channel can sprout almost any time while the lightning feeds it with its current.

Figure 17.A typical picture of the sliding spark channel in the pool with the ground

Experimental studies of "ENIN" JSC allowed to develop a computational model of spark discharges, sliding along the soil surface. The result revealed the dependence of the channels' length on the amplitude and time parameters of lightning current impulse, soil resistivity, the value of ground resistance of the building, which was struck by lightning. The results of field experiments of the All-Russian Scientific Research Institute of Experimental Physics were used for the computational model. Fig. 18 gives an idea of the nature of the dependence of the length of channels formed by soil resistivity and ground resistance values at the point of lightning strike. 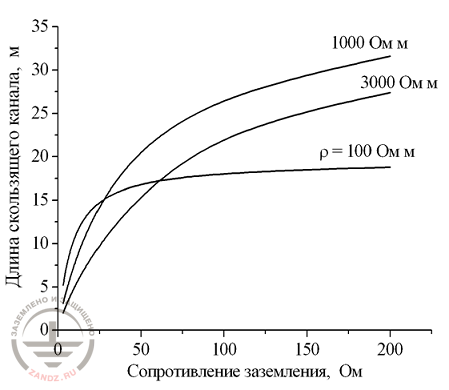 Figure 18. The ultimate length of the sliding spark channels, depending on the soil parameters and ground resistance at the point of a lightning strike

The calculations are performed for the average pulse current at the power of lightning with an amplitude of 30 kA at 100 microsecond pulse width. The increase of the channels length with the growth of the ground resistance is quite obvious, because the portion of the lightning current directly feeding the emerging channel increases in this situation. In the range of practically important ground resistances the dependence is close to linear. Nevertheless, even the channel length of lightning with moderate current of 30 kA is difficult to limit to 15 m, which is accepted safe in some regulations. With the lightning current increase this length increases remarkably (Fig. 19).

Reduction of ground resistance of a lightning rod can hardly be considered a practically significant measure of limiting the length of spark channels along the soil surface. This requires other measures. It is preferable not to try to influence the channel length but control its trajectory. This opportunity appears, for example, by a horizontal ground bus device directed to the opposite side from the potentially dangerous territory. Channel (if it appears) will be formed as an extension of the bus, and therefore, will go in a safe direction. The second possibility is connected with the fencing of the protected area along the exterior perimeter by an underground metal bus.

Read more "4. Pending discharges in an electric field of a thunderstorm cloud".