2. The number of lightning strikes into high-rise buildings

To simplify the analysis, it is advisable to consider the concentrated buildings, the height of which significantly exceeds other dimensions. For high-rise buildings such simplification is usually justified. Introducing an object as a rod with the height h, lightning constriction area for it can be represented as a circle of radius rM = 3h, which gives for the expected number of lightning strikes

Here nM -  average annual number of strokes per unit of flat surface of the ground. For the midland of Russia nM ≈ 3 per 1 km2; the maximum value in the country territory does not exceed 10. The quadratic dependence of the expected number of lightning strikes on the height of the object is well confirmed by operating experience. So, for a building with the height h = 30 m the expected annual number of strokes should be about 0.1 or 1 strike in 10 years of operation, while the object which is 100 meters in height will be affected by lightning almost every year, and at h = 200 m, the annual number of strikes should grow to about 4. It is observed in reality. However, at closer examination it appears that averagely, only 2 strikes are caused by downward lightning, and the other 2 are upward, starting from the top of the building.

Surprisingly, a similar picture remains for higher buildings. The total number of lightning strikes for them almost completely corresponds to the calculated value of the expression (2), and the number of downward lightning almost does not increase with altitude, remaining about the same as that for an object 200 m high. It may seem that the division of lightning to downward and upward has little importance for lightning protection practices. In fact, it is not so. Only downward lightning are formed by poorly predictable trajectories and can significantly miss the top of buildings, striking in its lateral surface, as it was often observed on the Ostankino TV tower (Fig. 7). 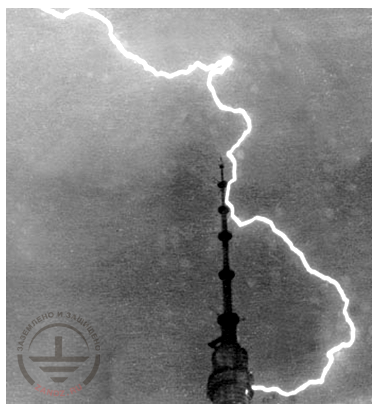 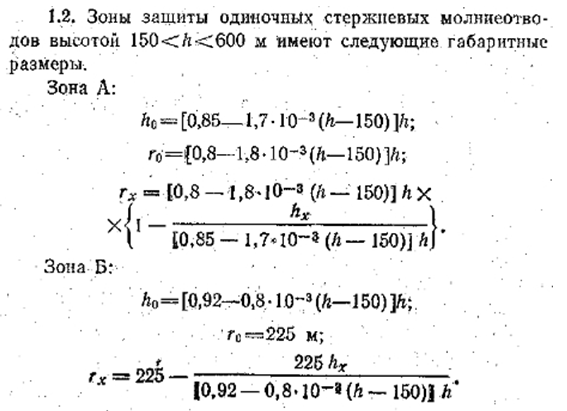 Thus, in determining the radius of the protection zone A at the ground level for a lightning rod 600 m high, the calculation formula gives a negative value. As for the height h0. defining the upper limit of the protection zone of ​​the lightning rod, it is found to be 0,085h. In other words, the side surface, up to the level of 50 m above the ground, appears unprotected against direct lightning strikes, if you follow the method of calculation of AD 34.21.122-87. It is hardly possible to say how trustworthy these protection zones are. They are not tested with any representative experience in operation of high-rise buildings. The only exception is the Ostankino TV tower, where long-term observations were organized. They confirmed the possibility of downward lightning strikes well below its peak, up to an altitude ~ 0,6h. A hit into the ground at a distance of r = 0,4h from the TV tower was fixed, and it actually confirms a sharp reduction in the relative sizes of the protection zone of high-rise buildings for downward lightning.

The last two words of the previous paragraph must be considered decisive. The developed protection zones refer to downward lightning only and determine only the probability of their breakthrough. As noted above, the radius of the constriction of downward lightning remains practically constant at the height of the building of more than 200 m. In the first approximation, it can be taken to be rM = 450 - 500 m. To find the expected number of strokes of downward lightning, it is necessary to make the border of their constriction on a plan, retreating from the outer perimeter of the object to the distance r.M. Calculate the resulting area and multiply it by the density of lightning discharges on the ground surface nM for this area. For any high-rise building, the height of which prevails over the other dimensions, it can be assumed that the average annual number of downward lightning won't exceed

since all upward lightning will strike the lightning rod, and if there is no lightning rod - the top of the building. Belowyou see the protection zones of a single high-altitude rod lightning rod with reliability of 0.9 and 0.99. They are built strictly according to the results of computer simulations on the basis of a statistical method used in domestic regulatory documents AD 34.21.122-87 and IS-153-34 ...21.122-2003. 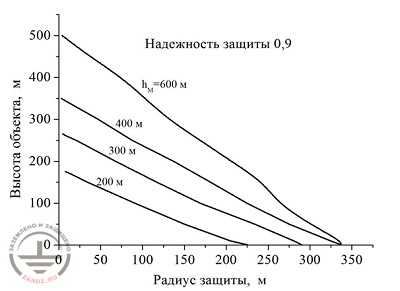 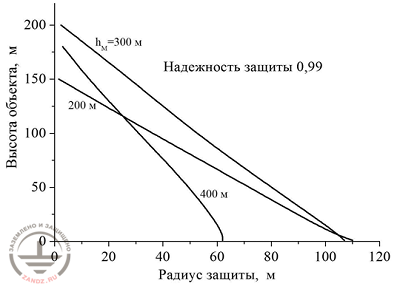 4. Lightning current drainage into the ground

All guidelines for lightning protection state that the lightning current drainage should be safe. What kind of danger do they mean? The main thing is the constraint of electromagnetic interference in the internal electrical circuits and object assemblies to the nondestructive level. It is especially important for high-rise buildings. Magnetic induction EMF is equally inherent to downward and upward lightning. Their total number strongly depends on the height of the building. Focusing on the skyscrapers, it can be confirmed that the number of lightning discharges may well exceed 10 per year, while for a typical 5-store building, it is unlikely to reach 1 strike in 20 years. The difference of more than 2 orders of magnitude by the frequency impact  is very significant. Its significance must be considered in the design. Of course, it is possible to assign protection to numerous SPD placed in electrical circuits, but such a decision is unlikely to be functional and won't ensure high reliability. It's more corrent to combine the first step from internal overvoltage with an external lightning protection device. 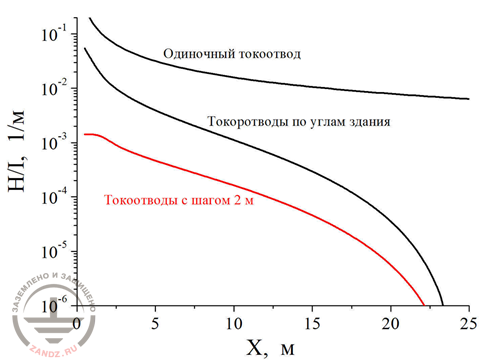 Figure 11. The magnetic field strength in the interior space of a high-rise building 50x50 m depending on the number of down conductors, transporting the lightning current

In this series of articles we have examined the effect of the number of down conductors to the electromagnetic environment in the interior space of the building. The main conclusions made there are also valid for high-rise buildings (Fig. 11). The red calculated curve reproduces the situation when metal fittings of glass units play the role of natural down conductors, these metal fittings posess high-quality metal compounds from the upper floors to the foundation of the building. In the most strained place (at the surface of the fitting), the magnetic field falls by about 2 orders of magnitude. Quite a comparable effect can be achieved by transporting the lightning current over the rods of multiple reinforced concrete poles or other metal structures. The main thing is that the effect is achieved without any significant material costs. By the way, fittings of glass units can be used as buses for potential equalization at different elevation points of the building.