Lightnings are the same worldwide
but standards for protection against them are different...

In Russia, lightning protection standards of UN International Electrotechnical Commission (IEC) are introduced step by step. This allows using a rich foreign experience, simplifies the use of imported equipment and, which is also important, allows the Russian products to enter foreign markets. Foreign standards are certainly translated into Russian, adapted if necessary and are made effective according to the Russian legislation.

Physical laws are equal in any country. In this sense, lightning nature is not an exception. However, when we use international standards, in particular in lightning protection, we may see hidden pitfalls.

On March 1, 2022, GOST R 59789-2021 "Lightning Protection. Part 3. Protection of Buildings and Structures from Damage and Protection of People and Animals from Electrical Injuries" has been introduced. It is an adapted translation of international standard IEC 62305-3:2010. It is obvious that this GOST "occupies the territory" of existing regulatory documents RD 34.21.122-87 and SO 153-34.21.122-2003. Moreover, both documents have drawbacks. RD 34.21.122-87 was made effective in different social and economic conditions while for SO 153-34.21.122-2003, no appendix was developed which would have allowed its efficient use. Long ago, such collision was easily resolved by making GOST mandatory and giving it the highest priority. Currently, Federal Law 162-FZ (Federal Law) On Standardization in Russian Federation that renders GOST unnecessary except for the standards listed in Technical Regulations as well as a series of special cases. GOST R 59789-2021 is not yet mentioned in any effective Technical Regulation. Therefore, . It's a different matter that mentioning the fact that the product has been manufactured according to this GOST, in the product datasheet. It is also a significant advantage in tenders, and a retail consumer will rather prefer GOST products if you properly explain all advantages associated with it. And if GOST is mentioned it means that the product should conform to it, otherwise the manufacturer will be punished. But to what degree should we follow the new GOST in terms of feasibility? 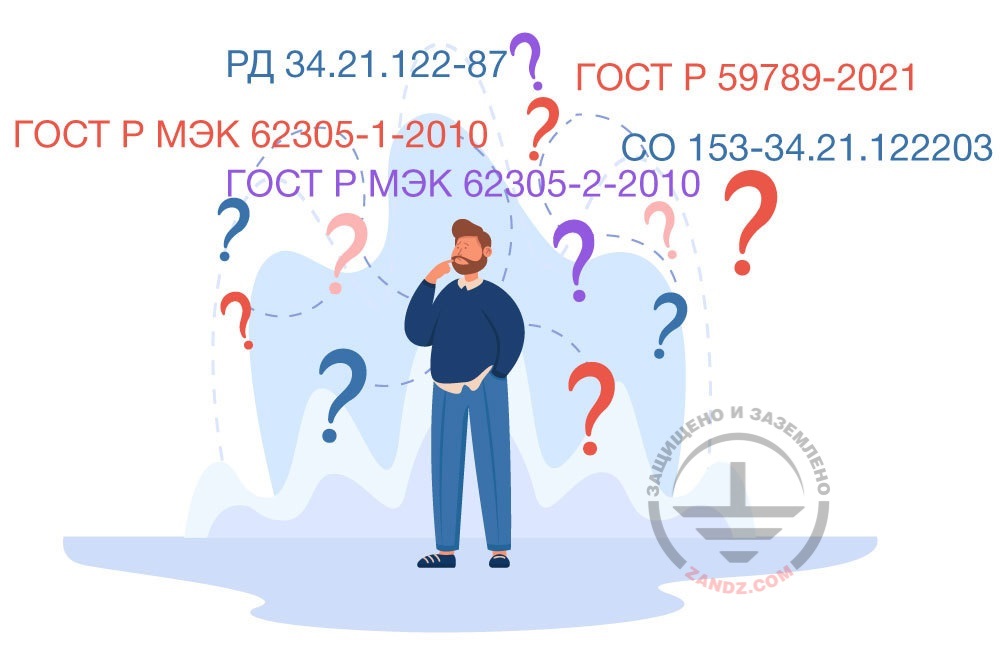 Image by pch.vector on Freepik

Main specifics of GOST R 59789-2021 include the use of a risk-oriented approach, which is a completely different principle of determining the lightning protection category compared to RD 34.21.122-87 and SO 153-34.21.122-2003. Loss risk decrease to a particular level becomes a priority. In addition to own risk, social meaning of possible losses is also considered. The risk calculation method is disclosed in GOST R IEC 62305-1-2010 and GOST R IEC 62305-2-2010. The new standard in a logical way completes a document set since without it, it is not actually clear how to apply two previous standards although, without them, this standard cannot effectively work. The fact that the digital designation of GOST R 59789-2021 is not like other standards of this series is related to new regulations according to which numbering should conform to classification principles adopted in Russia.

Unlike risk-oriented approach used in GOST R 59789-2021, in RD 34.21.122-87, the lightning protection category is assigned according to the intended use of a building or a structure , and in SO 153-34.21.122-2003, the classification is based on lightning strike hazard for the facility itself as well as for its environment.

Protection and calculation methods proposed by the new standard are also of great importance. GOST R 59789-2021 permits the following calculation methods for lightning rod location: protective angle, rolling sphere, grid method. And it is recommended to use the the rolling sphere method on a permanent basis. Note that the calculation method for the lightning arrester protection zone provided in Appendix A (mandatory) differs from those accepted before in Russia (RD 34.21.122-87 Appendix 3 and SO 153-34.21.122-2003 item 3.3.2). The new standard specifies that the protection zone begins from the lightning rod top without any factor of safety for height. There is no chance for a lightning to miss the lightning arrester's top! However, when adapting the international standard, this point was considered: a note has been added that, in the Russian Federation, a probabilistic method described in SO 153-34.21.122-2003 is also applied for lightning-rods and groundwires.

Differences in requirements for lightning protection

In some cases, GOST R 59789-2021 establishes the requirements to the structures which are different from national regulatory documents which have been previously approved.

In previous Russian regulatory documents for lightning protection, it is usually recommended to use natural current collectors, e.g. bars of reinforced concrete structures. Item 4.3 of GOST R 59789-2021 requires to measure electrical resistance between the highest point and the ground level point before this. It should not exceed 0.2 Ohm (note here that it is hard to take such measurements for high-rise buildings, since ohmmeters should be connected to a point using a cable having the length of several dozen meters and the resistance of about 0.01 Ohm). If it is greater, GOST recommends (recommends rather than requires!) to additionally install external current collectors.

GOST R 59789-2021 classifies buildings by their heights into two categories: up to 60 m inclusive and over 60 m. In the second case, lightning strikes to the building sides are possible, therefore, in certain conditions, measures to protect such impact are mandatory. This requirement is associated both with high-rise buildings becoming common and with the use of sensitive electronics thereon (including smart home systems) which can fail due to lightning strike to the side surface.

Requirements to the lightning protection design in the new standard draw attention to the need to provide safe distance of 10-15 cm for lightning rods from flammable materials to the protected facility. The lightning grid can be installed on an inclined roof with flammable coating by using large holders only. 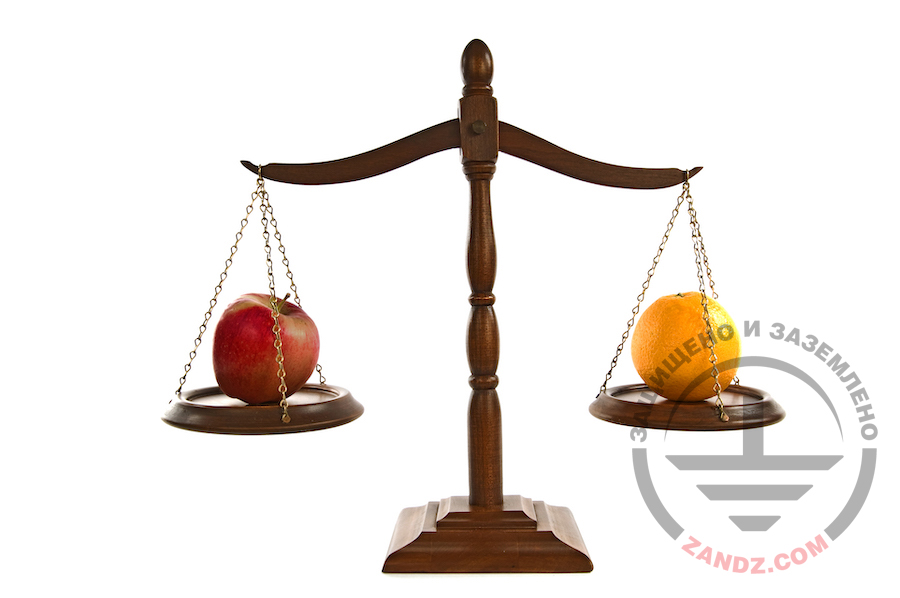 Optionality of fulfilling the requirements of GOST R 59789-2021 does not mean that they should be totally ignored. It is hard to hold you criminally liable for this, but the situation can still cause civil liability.

Even if GOST is not mandatory, it still falls under this requirement since according to 162-FZ, Article 16, item 2, "Basic national standards are approved subject to their public discussion and provision of consensus procedures. Instructions RD 34.21.122-87 and SO 153-34.21.122-2003 can also be considered common, therefore, The issue of priority will probably depend on a particular specialist who performs an expert review. Apparently, GOST containing errors in basic ideas of lightning physics and having principal drawbacks cannot be considered a priority in contraversial issues.

GOST R IEC 62305-1-2010 and, as a result, all subsequent standards of this series, including GOST R 59789-2021 do not cover: railroad systems; vehicles, water and air transportation, offshore facilities; high-pressure underground pipelines; power and telecom pipelines not associated with the protected building (structure). For the specified facility types, we should use national standards of the Russian Federation, i.e. previously mentioned RD 34.21.122-87 and SO 153-34.21.122-2003 as well as standards developed for certain industries (e.g. railroad transport).

Despite contradictions between the new regulatory document and the effective one, it is beneficial in its description and details of the lightning protection aspects which have not been covered in regulatory and technical documents, e.g. applications and methods of application of insulated lightning protection, prohibition to use radioactive lightning arresters, measures to protect against step voltage, and many other. Recommendations provided by GOST 59789-2021 should certainly be followed unless other opinion is stated in alternative standards. We cannot deny the fact that the development of one more document with its own opinion on how to protect against lightnings adds more chaos and causes additional questions in designers. It is great that its use is voluntary.

Order free calculation of lightning protection or grounding in the ZANDZ Technical Center to prevent from studying the contradictions on your own.

1. Norming of lightning rods on the roof