HOW TO MAKE GROUNDING IN AN APARTMENT, IF THE HOUSE IS NOT CONNECTED TO THE GROUNDING CIRCUIT?

There is often a need to make grounding in an apartment of a multi-apartment house which doesn't have central grounding.  This need is connected with the distribution of electronic technology, outdated communication lines of an old house, old wiring and other factors.

Today the grounding device is made in the beginning of the construction of new houses. However, there is no grounding in houses of an old type and it brings to the fact that withtime, the system of potential bonding ceases to exist, the wiring goes out of date. ZANDZ Technical center regularly gets requests about grounding in an apartment:

It is possible to solve these problems described above. For that it is necessary to connect the grounding device to the house.

It might sound strange, but there is grounding in old houses, only not in the form we are used to, but as a yellow-green wire. The thing is that the ground conductor is grounded at the substation and performs the function of working (N) and protecting (PE) ground conductor, we know this system as TN-C. It is possible to solve problems connected with the potential bonding system using this system, but you can't solve questions connected with the operation of electronic and highly-sensitive equipment. For that we need to divide the functions of the working and protective conductors. We will observe that further.

In order to include the artificial grounding device into this system, we need to connect it properly. The modified system is indicated as TN-C-S which is an analog of TN-S system and has 3 or 5-wire wiring, that is at the connection of grounding, we modernize TN-C system (2 or 4 wires) into TN-C-S system, which performs the functions of TN-S system. 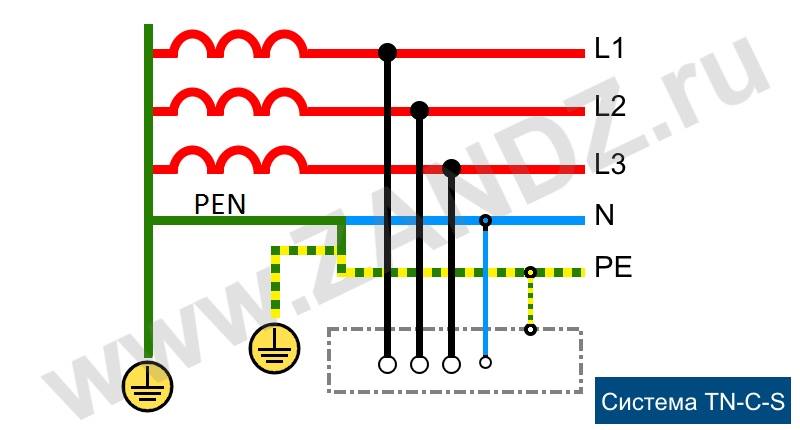 The neutral protective and neutral conductors are united in one conductor in part of the system:

Talking in simple words, it is necessary to connect the grounding conductor to the neutral bus in the main distribution board, and for a zero conductor it is necessary to install an additional bus, which must be connected with the grounding bus, as shown in figure 2, with the help of a quick fix. All measures must be taken strictly according to the "Electric Installation Code", EIC, section 1.7. 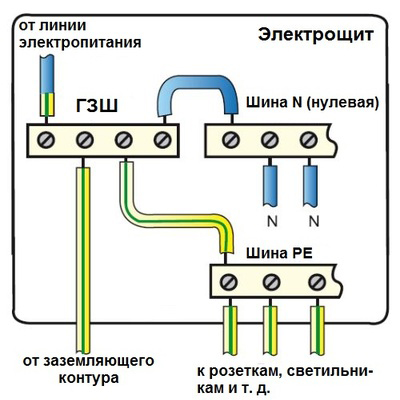 This way, we can do grounding in the apartment. Ready-made kits of electrolytic grounding ZANDZ can be used as the necessary equipment or contact our ZANDZ Technical Center for help.