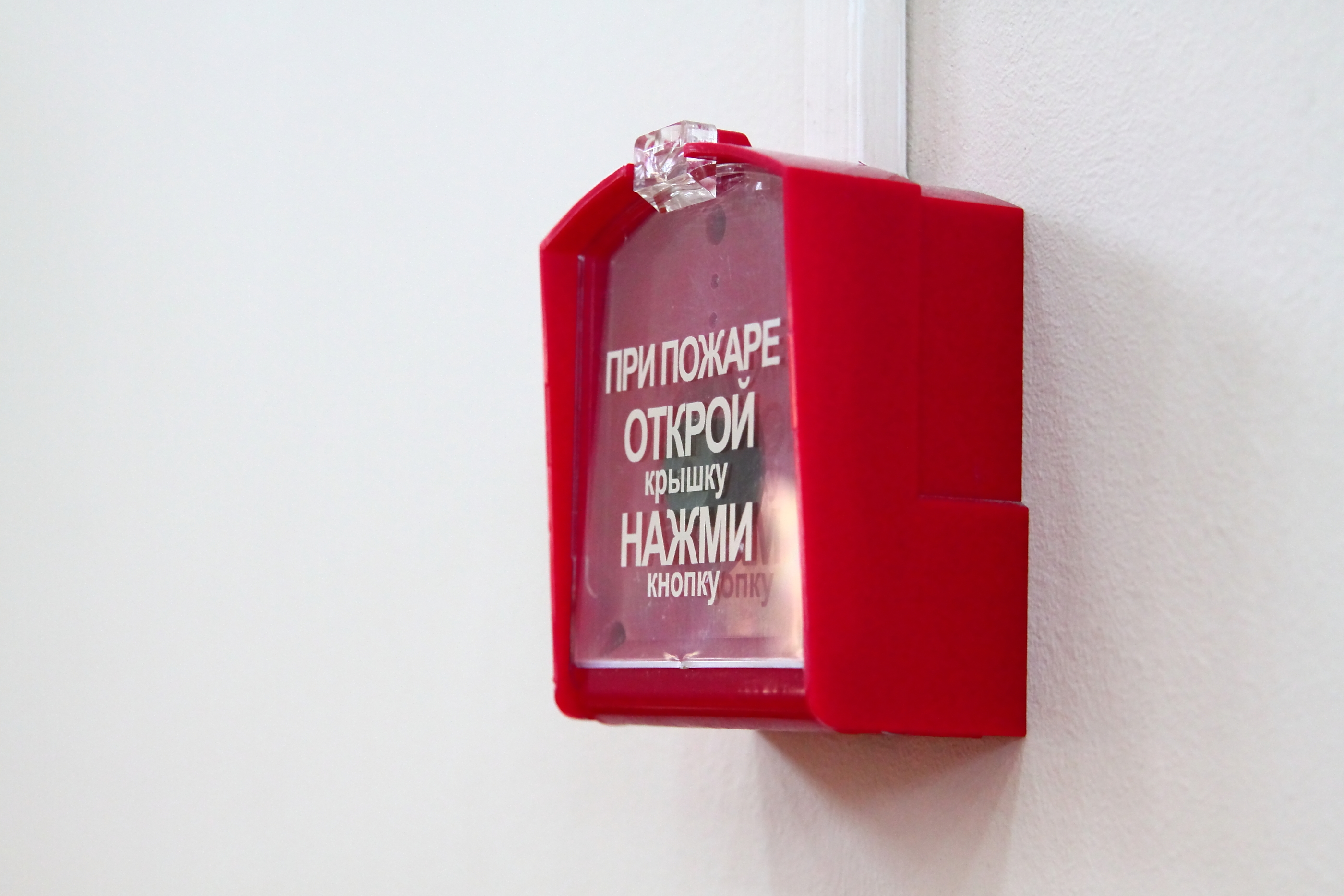 The issues of improving reliability of fire alarm and fire control systems have been focused on recently. This is due to the wide use of large public buildings (tremendous malls, covered stadiums, etc.), high-rise structures as well as increasingly complex equipment used in public areas (e.g. in the theme parks). Note that not only the alarm system failure but also its systematic false triggering are dangerous. But let us have both feet on the ground. As our bitter experience shows, in the conditions when we have to evacuate the visitors without any reason sometimes, which means losing profits, the owners of the locations often choose to turn off the alarm system. When false triggering of the fire control system occurs, a damage in the form of the product spoilage and sometimes even injuries to the personnel and visitors are possible.

Most Sensitive Parts in the Fire Alarm System

To connect the fire alarm and security controller (FASC) in fire alarm systems, RS-232 interface is still being used. Its application is a tribute to the conservatism of the fire alarm manufacturers. The modern PCs do not have this interface anymore; therefore, the USB and RS-232 interface module is used. Connection with RS-232 is one of the most sensitive parts in the system. The point is that such interface does not contain a galvanic junction, which is a reason for its low interference immunity.

Finally, as well as for another equipment, the fire alarm system and the automatic fire control systems are sensitive to power quality. These can be both 12 and 24 V DC lines going from the accumulator (power unit) and 230 V AC lines. From the 230 V line, the power unit of the fire control system is protected pretty well. And the voltage of the 12 or 24 V DC lines is typically supplied to electrical circuits directly. Due to this, pulse interference may penetrate the control automation equipment.

Since 2009, in Russia, the Code SP 5.13130.2009 Fire Safety Systems. Automatic Installations of Fire Alarm and Control Systems. Design Standards and Rules approved by the Ministry of Emergency has been effective. They recommend to use, in the fire alarm flat cables, the wires designed for the communications, and if the line voltage does not exceed 60 V, the use of the phone wires with copper cores is allowed. Also, SP 5.13130.2009 describes the means to protect cables from the potential electromagnetic impact (e.g. it is recommended to use the earthed screens for the wires), but it means the interference in general (e.g. from the operating electrical equipment) without the particular detailing of the cases associated with the lightning impact.

However, currently, technical guidelines are primary documents used for technical regulation. Federal law No. 123-FZ of July 22, 2008 (as amended on December 27, 2018) has made effective the Technical Regulations of Fire Safety Requirements. These Regulations do not contain any requirements for the mandatory protection of fire alarm means and automated fire control means against the lightning impact. There is only an indication on that the fire control installations should provide an adequate reliability level.

The Technical Regulations of the European Economic Union (EAEU TR) have a priority compared to the technical regulations. In 2017, EAEU TR 043/2017 On Requirements to Fire Safety and Control Systems was adopted. The only clause describing the electromagnetic impact is item 33 "The technical means operating as part of the fire automation systems should provide the electrical and information compatibility with each other as well as with other interacting technical means". However, these TRs allow for the manufacturer of the fire safety equipment to voluntarily take an obligation to comply with the standards and rules of a particular country.

Thus, the effective regulatory base does not provide for a ready-made algorithm of the protection of the fire alarm means and other automated fire safety equipment against the electromagnetic pulses caused by lightning. We can briefly recommend the following measures: 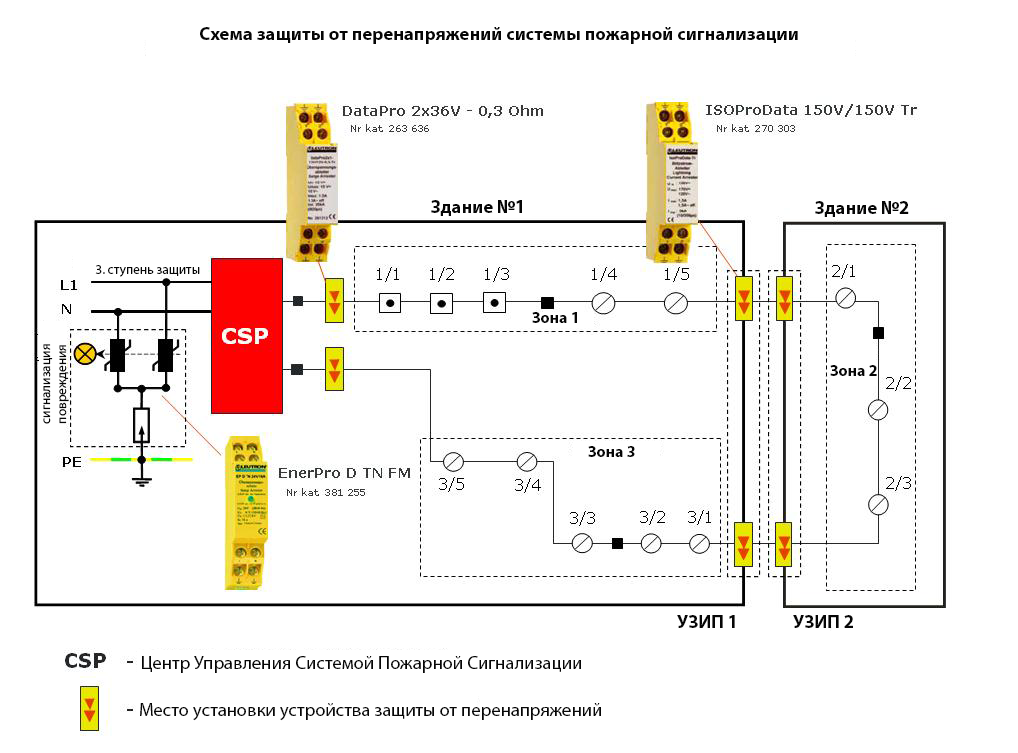 Diagram of protection of the fire alarm system against overvoltage

Clauses 1 to 3 are implemented in a typical way through using the ZANDZ earthing equipment, shielded cables and special enclosures for the equipment.

Clause 4 requires the use of SPDs specifically designed for the fire alarm systems. The main requirement is that the SPD should not change the level of the transmitted signal or introduce any distortions therein. The SPD parameters are governed by GOST IEC R 61643-21-2014 Low Voltage Surge Protection Devices. Part 21. Surge Protection Devices Connected to Telecommunications and Signalling Networks. Performance Requirements and Testing Methods. For example, limiters of series RST SAP /en/tovar/7/6/. conform to this standard. Such limiters are designed for a low rated current 1.5 or 3A, and they have a low value of serial resistance (0.33 Ohm or 0.07 Ohm).

During the design of the lightning protection for the fire alarm system and the automated fire control systems, a situation is observed when single standards are lacked. The departmental instructions mean much in this issue. There are some nuances associated with the reorganization of the standardization system and transition to the technical regulations of the Eurasian Economic Union. In these situation, it is better to contact qualified specialists. When you contact the ZANDZ Technical Center, you will receive a consultation to protect against the lightning the fire control systems that conform to the current standards, including the departmental ones. 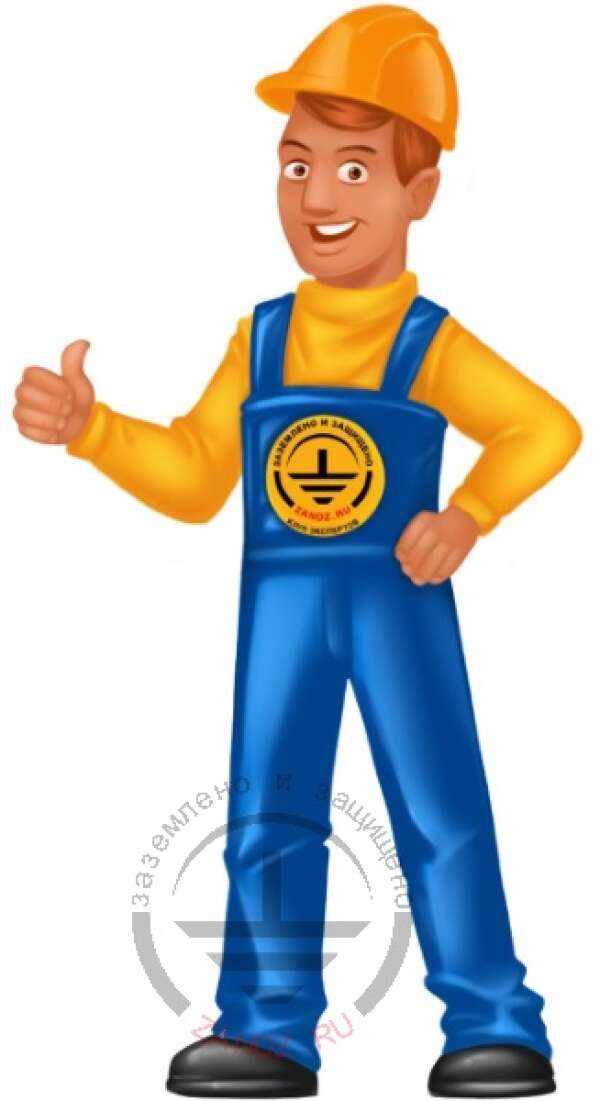 2019 ZANDZ Competition for the Best Earthing System and Lightning Protection