Energy sector, and more precisely its part relating to electrical energy, includes a plurality of electrical installations, for which grounding is required. Depending on the purpose of the object, it is important to organize a proper grounding device. It should serve as a protective grounding, serving to ensure electrical safety, and also working grounding, needed for the operation of electrical installations, including grounding pursuing the goal of protection at the operating faults, such as short circuit, and dangers resulting from a lightning strike.

Grounding is necessary not only for the operation of electrical machines and devices, but also for the functioning of the automation and electronic devices that contribute to the management and control of work processes, protection of electrical installations from damage in case of accidents and malfunctions, and to prevent accidents themselves. Otherwise, if grounding is organized incorrectly, or is totally absent, there is a risk that as a result of emergency situations, the electrical installation will be out of operation for the time necessary to detect and eliminate the causes. During all this time segment, sometimes taking several hours or even days, the customers, ranging from residential buildings and finishing with the district, city, subject of the federation, will be without electric power. As the consequence of power interruptions there may be financial losses due to production downtime and threats associated with the disruption of life-support sphere.

To avoid a power failure, it is important to ensure trouble-free operation of production facilities, conversion, transformation, transmission, distribution and consumption of electrical energy. This is ensured by a number of factors, including the organization of high-quality grounding, corresponding to the regulatory documents. 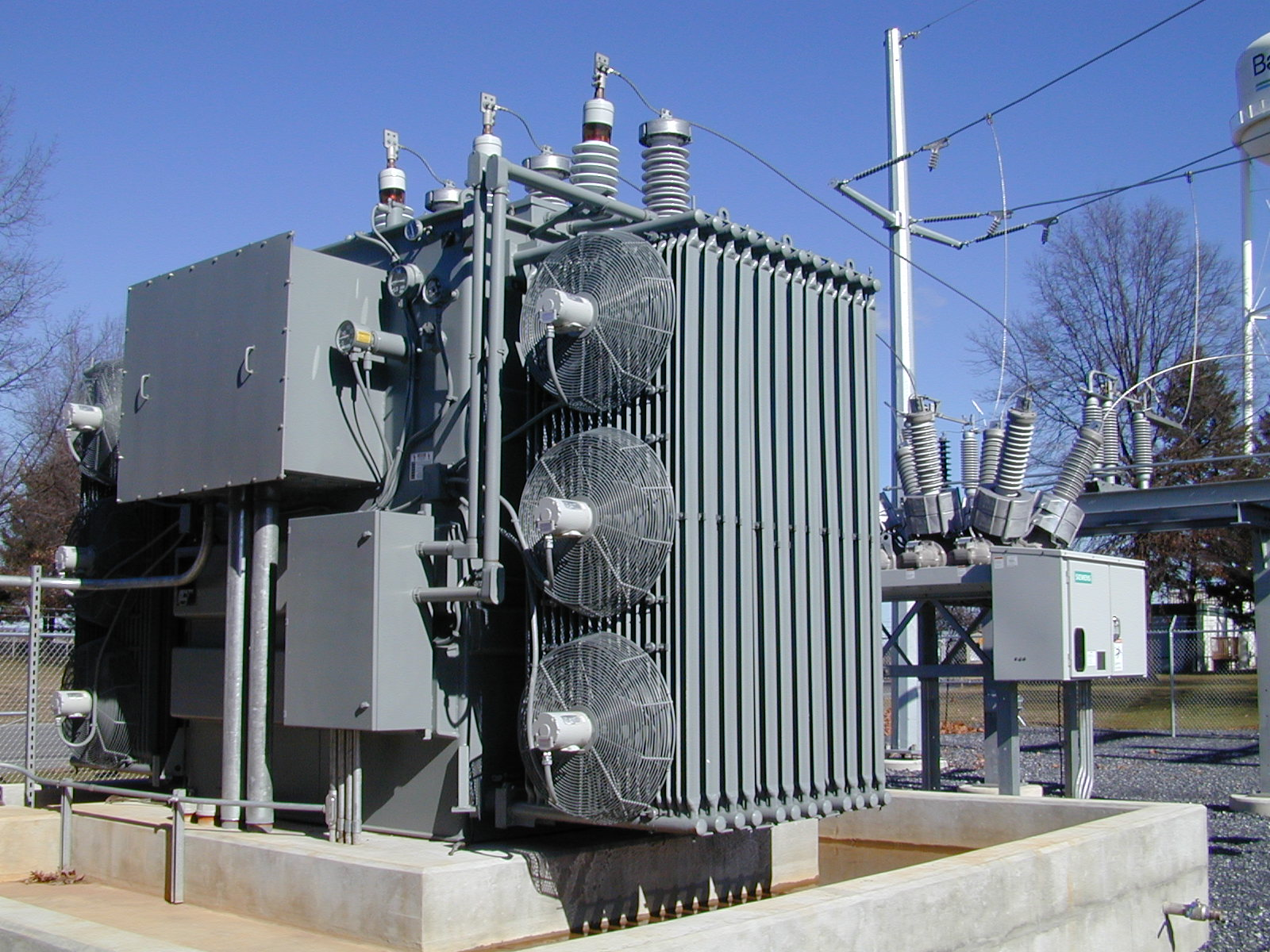 Power stations function in close contact with other objects - electrical substations. They serve for the reception, conversion and distribution of electric energy. There exist transformer substations (TS), which convert the electrical energy of one voltage level to another, and convertering substations, serving to convert the type and frequency of the current.

At these sites, according to EIC 7 ed., it is necessary to connect the grounding device to: neutrals of generators and transformers, machines, surge arresters, grounding devices of buildings and structures, as well as lightning conductors and their ground electrode systems.

Grounding openly placed equipment - outdoor switchgear (OSG) of substations, is usually performed in the form of meshes, consisting of horizontal and vertical ground electrodes and covers the whole territory. Metal constructions for the equipment and parts of cable constructions, as well as grounding contour, which can be laid both inside buildings and outside at the distance of 1 meter from the walls must be used as grounding devices of closed switchgear (CWG) and power stations. In addition, the foundation reinforcement must be used as a grounding contour.

The configuration of the grounding device is determined by the location of equipment, resistance norm, the need to ensure alignment and equalization of potentials, electromagnetic compatibility requirements.

For all the power facilities it is necessary to properly perform the arrangement activities of lightning protection, which in conjunction with the grounding composes the united system. Thus, rod (including floodlight towers, radio masts and supports of overhead lines) and catenary wire lightning rods, covering the machine, equipment and conductive parts by the protection zone. The height of the lightning rods is selected based on the required reliability of protection, which is determined by the probability of a lightning strike into the lightning rod, and not any other object. Lightning current, flowing from the lightning rod then spreads in several directions in the ground from the ground electrodes. Open switchgear protection equipment, including transformers, is performed by protective devices - surge arresters that protect against oncoming current pulses and must also be connected to the ground electrode.

A correctly calculated and organized grounding device in compliance with the requirements to lightning protection is needed to avoid damage to the equipment and to ensure electromagnetic compatibility metric values ​​below the required values.

When transmitting electric power by overhead lines (OL) grounding of supports is carried out.

In case of a broken wire, wire whipping, there appear various types of closures, including short circuits closures resulting from a lightning strike, when the arc discharge results in an overlap of the air isolation or insulation of linear reinforcement and also puncture of insulators. In this case, the support is under a significant potential, which leads to dangerous values of the step voltage. Grounding allows to reduce the value of the step voltage and provide electric safety of people.

Grounding is also required for operation of relay protection and automation (reclosure, differential protection, distance protection). Operation of these devices is to detect the type and place of damage and cutoff of the line, and it repeated power, when the fault was temporary and has removed itself.

Lightning protection of overhead lines is provided by a ground wire, which serves for receiving a lightning strike. At a strike into the support or wire, lightning current will flow into the ground through the support structure, and then to the grounding device. Execution of a groundign device in accordance with the rules will allow drain the pulsed current into the ground and ensure its spreading.

Lightning protection devices - arresters, surge arresters, spark gaps - allow to limit the induced overvoltage caused by lightning, as well as the overlap from the cable to the wires, and, which is unlikely, but is not completely excluded, a direct strike into the wire. These devices are suspended on wires and are connected to a grounding support structure and also require qualitatively organized grounding.

Grounding of wooden supports with metal crossarms without grounding wires and lightning protection devices is not carried out.

A properly designed power transmission line, as well as in the part of lightning protection devices, relay protection and automation and their coordinated operation, reduces the amount of damage and accidents, and thereby significantly reduces the number of cuts off.

2.1 Requirements to grounding of generation and power conversion facilities

The requirements to grounding of energy facilities are contained in EIC 7 ed. For objects of generation, transformation and distribution of electric power are indicated in paragraph 1.7, which also contains resistance standards cited in this chapter.

Grounding of substations and power plants is performed based on the requirements of the grounding device resistance or by the value of the touch voltage, to which the personnel, being at the workplace, and the rest of the facilty, is subjected.

Grounding device, performed based on the requirements to the resistance depends on the voltage class and type of power source neutral point - the generator and the transformer.

Electrical installations with the dead-grounded neutral of voltage more than 1000 V, require a grounding device, which are attached to the generator or the transformer neutral point, having a resistance of up to 0.5 ohms and for up to 1000 - the resistance is not more than 2, 4, and 8 Ohms, respectively, with line voltages 660, 380 and 220 V for three-phase current source or 380, 220 and 127 V for single-phase current source.

In electric installations more than 1000 V, the grounding device can be performed based on the requirements to touch voltage, the value of which should not exceed the one specified in GOST 12.1.038, and exposure time indicated in p.1.7.91. EIC 7th ed. Such an approach to the design is selected when the resistance requirement cannot be met, for example due to high soil resistivity.

Embodiment of grounding devices of substations has been generally described in paragraph 2.1. of this article. It should be defined by Chapter 1.7. and paragraphs 4.2.133 to 4.2.159 of EIC 7 ed., and if the object in under the government of PJSC "FGS UES" STO 56947007- 29.130.15.114-2012 GUIDELINES FOR THE DESIGN OF GROUNDING DEVICES OF SUBSTATIONS WITH THE VOLTAGE OF 6-750 kV. These regulations also contain requirements for lightning protection system and its grounding device. It should be noted that it is necessary to rely on the requirements of the AD 34.21.122-87 and IS 153-34.21.122-2003 - documents, which are the main ones when designing lightning protection.

When distributing electricity to consumers, a repeated grounding of the PEN-conductor is carried out. It is performed by means of ground electrodes, which are installed at the ends of the overhead lines with the voltage of 1000 V, at the branches from them longer than 200 m, as well as inputs into the installation. In this case, the total resistance to spreading of ground electrodes of all repeated groundings of PEN-conductor is normalized. It must not be greater than 10 ohms, and the resistance of each of the repeated one should not exceed 30 ohms. Resistance standards are indicated for line voltage of 380 V and three-phase current source and 220 V for single-phase current source, for other voltage the values ​​they can be viewed in paragraph 1.7.103. EIC 7th ed.

Electrical installations with the isolated neutral require the implementation of instructions from points 1.7.96, 1.7.97 and 1.7.104 of the EIC 7 ed. Resistance of the grounding device should correspond to the value obtained from the ratio R = Uпр / I (Uпр = 250 V in case of electric installation with the voltage class more than 1000 V; Uпр = 50 V in case of voltage up to 1000 V). Typically, it is not required to achieve a resistance value of less than 4 ohms.

In case of placing the grounding device in soils with high resistivity, it is allowed to raise its resistance rate up to ten times. Paragraphs 1.7.101 and 1.7.103 of the EIC 7 ed. allow to increase the normalized value at a divisable exceeding of the resistivity index of 100 ohm * m in networks with a dead-grounded neutral with the voltage of up to 1 kV, and point 1.7.108 - at the exceeding of 500 Ohm * m in electrical installations with voltages above 1 kV and up to 1 kV with the isolated neutral.

When grounding is performed for power transmission objects, it is necessary to be guided by paragraph 2.5.129. of the EIC 7 ed.

Resistivity of overhead lines supports depends on the above factors as well as on the voltage class, height of supports, number of circuits, soil resistivity and location in a populated or not populated area. In the generalized form it is given in table 2.5.19 of the EIC 7 ed.

Lightning protection of overhead lines of 110-750 kV must be carried out by cables throughout the entire length of the line in accordance with EIC 7 ed. , point 2.5.116, and in addition, protection devices are used: overvoltage limiters, arresters and spark gaps.

Grounding of a cable line (CL) is carried out at its ends and must comply with the requirements of chapter 1.7 and points 2.3.71-2.3.75 of the EIC 7 ed. Armor, sheath, cable boxes and metal structures, in which cables are laid must be grounded.

ZANDZ Technical Center provides calculation and design of grounding and lightning protection for various objects. Some examples related to the energy topic:

The purpose of this article was to tell the purpose of grounding at the power facilities and to review the information that determines its design concept and importance of standardized parameters. It is necessary to observe many requirements for different types of objects and it is impossible to describe them all in one article, therefore, it references to regulations that will help to determine the highlights, and deeper questions of construction of grounding and lightning were given. But you don't have to study it on your own, you can entrust the work to professionals!

ZANDZ Technical Center is experienced in design of numerous facilities of electrical energy, not only in terms of grounding and lightning protection, but also as part of a full-fledged project.