The peculiarities of protection zone calculation applied in the RF

Sizes of protectio zones used in the RF are counted with the help of a statistical method. With its help it is possible to define the expected number of breahtrhoughs to any number of structures. It can be a single building, or some part of it, or a complex of buildings.

Calculated formula in the Russian design can be used for lightnng rods, the height of which lies within 150 meters. EIC standards prescribe to only use lightning rods with the height of up to 60 m.

It is necessary to pay attention to some difference of caculation formula regarding protection zones sizes given in AD 34.21.122-87 and IS-153-34.21.122-2003 which was accepted 5 years ago. In particular, at the calculation given by formula, offered in the instruction of the year 1987, the value of protection radius of a rod lightning rod 30 m high for two zones, located on the ground level, will br 45 and 31,5 meters. At the same time, similar calculations with the same data, given in formula 2003 will give 24 and 36 meters.

The existing permission to use any of these regulatory documents when designing lightning protection can be explained by the fact, that both these documents are responsible for completely different probabilities of a lightning breakthrough. This way, it is possible to use both authorizing documents on lightning protection at the design, in order to have a possibility to choose optimal protection reliability for a certain case.

After holding a great number of experiments it was fixed that the electric puncture can happen not only on the shortest air interval but on any of it. The range of values of sparking voltages is subject to the law of Gauss (normal law) and is within certain limits.

Here U1 and U2 are average values of sparking voltage with the standards of range of σ1, σ2 and ∆Uр21 is their difference, which is also subject to a normal law. Scatter standard σ∆U is determined as

The probability of a breaktrough of a certain interval Ф1 can be executed by a tabulated integral of probability.

At the output of the formula presented here, the probability theory was used. It means, they can be used for the estimation of probability of any pair of events. Providing they won't happen without a dependence from each other. And completion of one event is an obligatgory condition for non-completion of another. The presence of a possibility of covering not only the shortest interval, but any of it is also considered.

Below you will see the main positions of the statistical method: 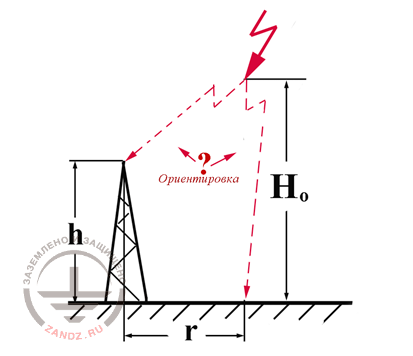 Probability of a lightning breakthrough

In order to define the number of breakthroughs, it is necessary to integrate F(r) along the whole surface of orientation. Then this result shall be multiplied by value of relative density of thunder strikes in this area nm

We get Ho= 5h. Relative value σ ≈ 0,1 was recieved during laboratory experiments with the intervals of great length. There is no reason to achieve a more precise value as this parameter doesn't have strong influence on the calculation results.

The material was created on the basis of an article by Professor Eduard Meerovich Bazelyan "Selection of lightning rods in the IEC standard".