What is the service life of lightning protection? Field research in Poland

When installing the lightning protection system, the owner typically believes that it will serve for tens of years and will not require attention until the structure de-commissioning. The field experiments conducted in different climatic conditions, demonstrated the actual service life of the lightning protection system and some features, which should be taken into account during installation.

Usually, the industrial parts of the lightning protection system — lightning rods, current collectors, couplers, are intended for secure operation for long periods, which are not less than 25 to 30 years. However, the grounding parts buried in the ground, are subjected to destructive impact of the environment. It is often hard to predict how fast the buried parts of the grounding system will be wrecked by corrosion. To do this, we have to consider many environmental factors, such as soil type, its specific resistivity, moisture content, aeration degree, temperature, etc. In the end, we cannot be sure that in many years, the lightning protection system will still provide the building safety.

The answer to this issue of the lightning protection systems service life may be given in the course special research in different climatic zones. One of such field experiments was conducted by the researchers from Warsaw Polytechnic University and the company producing the GALMAR lightning protection parts, which are also marketed in Russia. The research "Field corrosion tests in Poland of copper coated steel earthing rods for LPS" was first presented by Marek Loboda and Robert Marciniak at the 29th Conference for Lightning Protection Systems held in 2008 in Uppsala, Sweden (www.iclp-center.org).

The researchers have chosen two sites for the experiment. The first site is located in Melno in the northern Poland, in the Baltic Sea coast. The second one is located in the central Poland near Inowrocław. In both cases, the soil was sandy, but in the sea coast, it is more salty and more aggressive to metals.
Three-meter copper-bonded and zinc-bonded steel grounding rods were chosen as testing samples. Each testing sample consisted of two parts, i.e., it had one coupler. Zinc-coated rods (50 to 60 mcm) were 20 mm in diameter, while copper-coated rods (at least 250 mcm) were 16 mm in diameter. Generally, copper-bonded testing sample was suitable for typical commercial solutions, for example, such as ZANDZ modular grounding.

The experiment was long-term: the grounding rods were buried in the soil in 2003. Some of the rods were extracted in 2005, and the other part was extracted in 2007. After that, they were subjected to corrosion study.

All samples extracted in 2 years and in 4 years had the signs of corrosion. The greatest degree of corrosion, as expected, can be seen in parts, which were placed near the ground surface.

Photo 2. Test samples corrosion. The sample from the Baltic Sea coast (Melno) and the continental part of the country (Inowrocław). The samples coated with copper (a); zinc (b)

The zinc-coated steel parts lost the significant area of their coatings, while copper coating remained almost intact. In particular, in four years, the coating made by hot-dip zinc coating lost up to 40% of thickness (which decreased from 50–60 mcm to 30–40 mcm). In average, the zinc coating loses 5 to 6 mcm of thickness per year, i.e., in European climate it destroys completely within a period of four to five years. In a salty soil, some portions of the coating of the lightning protection system disappeared as early as in two years.

Note that the deepened testing samples corroded almost similarly both in salty and regular soils. However, this happens only until the protective coating exists. After its destruction, we must expect more rapid damaging of steel parts installed in the salty soil. 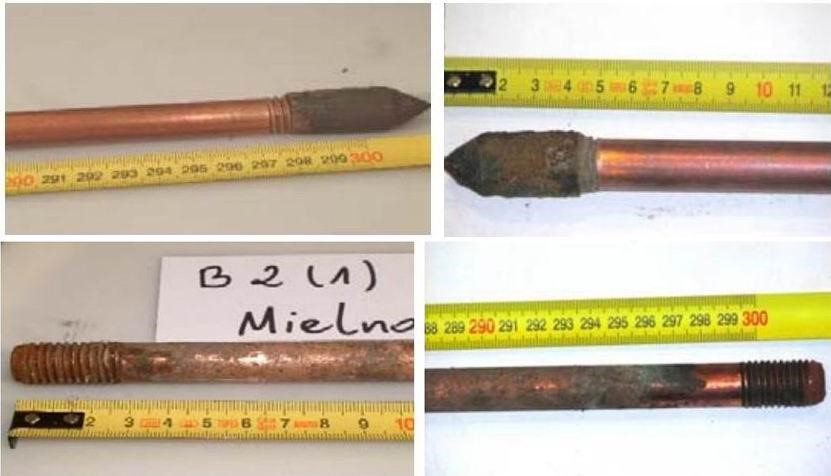 Photo 3. The parts of the lightning protection system destroy more rapidly if they are installed near the ground surface. Also, note that unprotected steel tips at the ends of the grounding rods are particularly sensitive to corrosion

Determining dimensions of the grounding devices and choosing protective coatings for steel conductors must be based on practical results obtained from the field tests. Independent institutions carry out the tests worldwide in different climatic conditions.

The Polish research are still ongoing: the test is planned for the full service life of the lightning protection systems. However, even the initial data demonstrate the results that are similar to those obtained in the US in the course of long-term project for studying different grounding types. The American tests have also demonstrated the benefits of the copper-coated conductors. The copper coating resists corrosion better in all types of soils compared to the zinc coating. At the same time, when installing the lightning protection system, especially in the aggressive soils, you should take into account that the copper coating also destructs. In these cases, the most reliable solution is using the lighting protection system that contains the parts made of stainless steel. Up-to-date modular lightning protection systems that are made of stainless steel can function in the most aggressive types of soil, including highly saline and over-acidified ones.