The fifteenth webinar of a series "Grounding and lightning protection: issues and problems arising in the design"

Full-screen mode with the quality of "720p" is recommended

Though it might be strange but catenary wire lightning rod is the most widely used type of a rod, and its efficiency is wells studied, because millions of kilometers of overhead power transmission lines are protected by catenary wire lightning rods - single or double. For many years, the International Committee of CIGRE has been collecting the world experience of using catenary wire lightning rods. Their reliability depending on the height of hanging and protection angle is defined at the level of 0,999. It should be noted that the static calculation method of a breakthrough probability, on which protection zones of lightning rods were defined in the regulatory documents AD 34.21.122-87 and IS-153-34.21.122-2003, they were mainly calibrated by the experience of using ground wires.

All other things being equal, the greater protection reliability is provided by the organization of closed catenary wire lightning rods and disposition of ground wires with negative protection angles. It allows to minimize the height of ground wires hanging and reduce the number of strikes into the protected territory, and consequently the number of dangerous electromagnetic impacts on circuits of micro-electronics, including underground.

Another crucial advantage of catenary wire lightning protection is possibility of installing supports of ground wires outside the protected territory without any significant financial expenditure. This way it is possible to weaken the conductive connection between the ground electrodes of these supports and grounding contour of the protected object, which almost completely liquidates the penetration of lightning current into underground utilities. Finally, thanks to the removing supports of ground wires from the protected territory it allows to stop the formation of sliding spark channels of lightning current from the entry point into the ground, or orient them in a direction safe for the object. 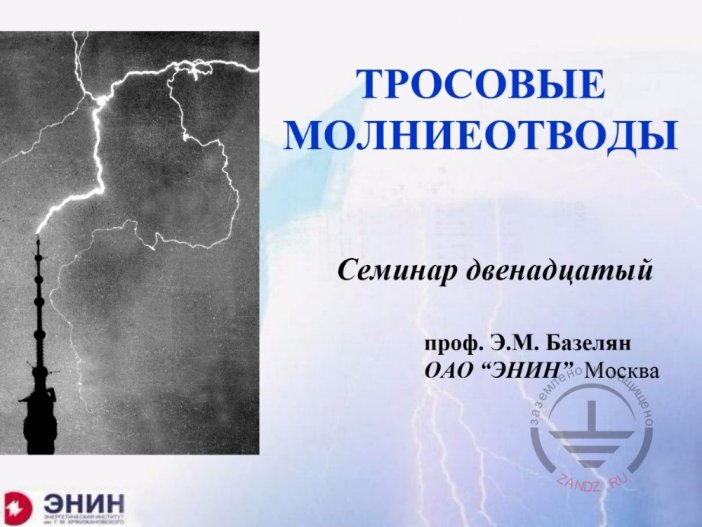 - I am happy to congratulate you with the first of September, even though it is 7th but for us it is still the first. When I've been preparing myself for the seminar, I caught myself on a thought. You know that we elderly people become pigeons with years and when I am asked about my profession, I am happily answering that I am a lightning protection specialist and that I deal with ultra-high voltages and this causes respect to my personality, I am pleased. What I caught myself on is that today we don't have to talk much about ultra-high voltages, because the questions which are connected with lightning protection by the level of voltage go down and down and now when we deal with lightning protection, we start to talk about units of volts, because the main misfortune which lightning carries now is electromagnetic pickup in circuits controlling automation, relay protection in the channels of information transmission. It is the most important question today. Talking about catenary wire lightning rods, I will look back at the famous problem of electromagnetic compatibility, because it is the most important today for lightning protection specialists. 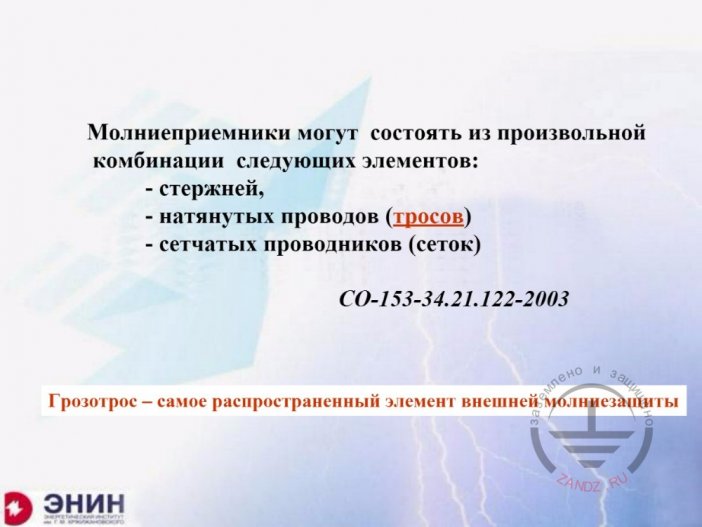 Lightning rods may consist of arbitrary combination of the following elements:

- So if to talk about catenary wire lightning rods, we need to address to the regulatory document IS-153, where it is written that lightning rods can be rod, consist of strained wires and meshes. Designers acknowledge rods, but do not acknowledge meshes. Though the efficiency of these meshes is exclusively small. And the situation with wires is a bit strained. 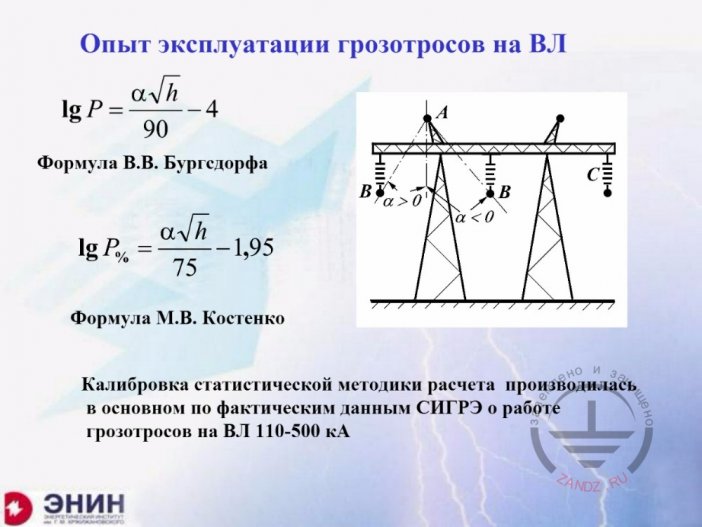 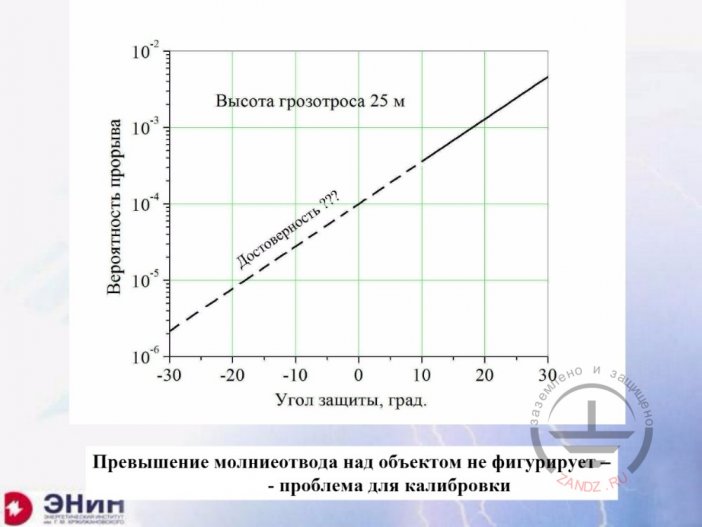 Probability of a lightning breakthrough

- So if to summarize these two formulas, the following thing happens. It turns out that depending on the protection angle the probability of a lightning breakthrough increases strongly, and the reliability of protection becomes worse, if to reduce the angle and switch to negative protection angles, then the reliability of protection becomes exclusively high. If to take this theoretic curve, then look, only a small piece of the curve is given in a full line. This part, which is in full lines, says that there are quite a lot of experimental points and we can count on the fact, that the data given by the calculation formulas they are really justified by a great use experience. This fill curve comes to the level 10-3 that is one lightning out of a thousand breaks through to the protected object. These are ultimate values, which can be used for testing any calculation methods, if to speak frankly, these are the zones of rod lightning rods which you like a lot and which are given in the regulatory documents AD- 34 and IS -153. These zones are received by the calibration of the data given by the catenary wire lightning rods. If there were no catenary wire lightning rods, there would not be protection zones of rod lightning rods. That's the situation. 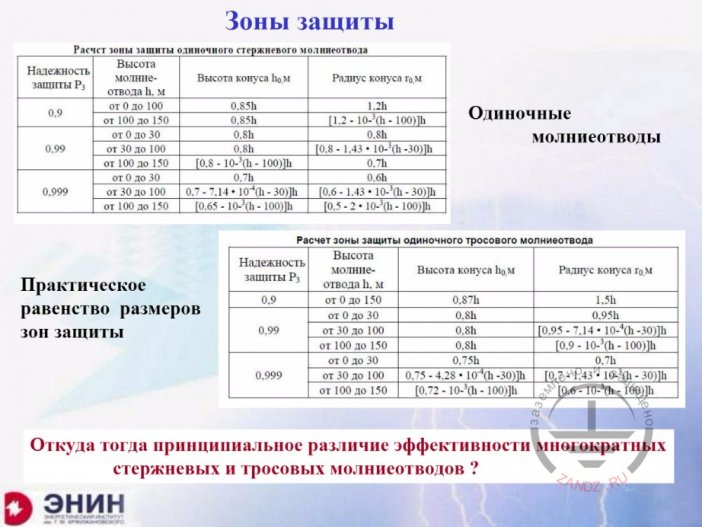 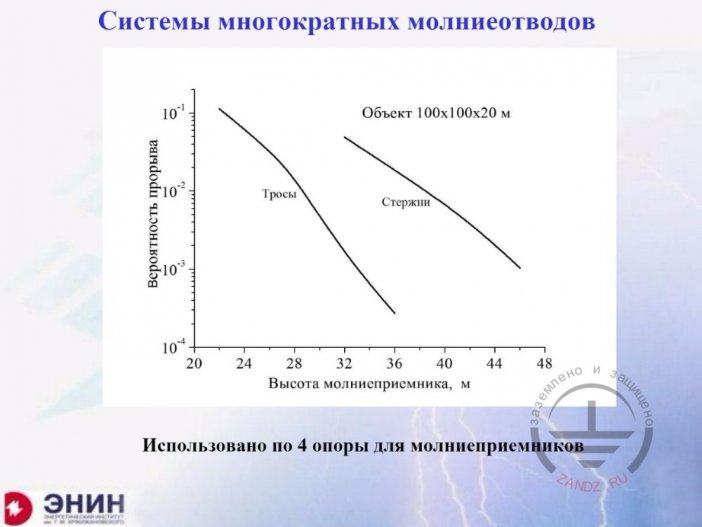 - And now to demonstrate this dry fact, I want to show you such a thing. I have an object. Let's suppose the object is a workshop or a large warehouse of a size 100*100 meters and 20 meters high. I want to apply rod lightning rods for the protection of this warehouse and I want to offer catenary wire lightning rods. I take 4 supports, put these 4 supports at the corners of the warehouse and put rod lightning rods on them. I have a curve, which shows how the probability of a lightning breakthrough changes depending on the height of rod lightning rods. I will orient on the probability of a breakthrough of 0,01, that is protection reliability of 0,99 and see what rods I need. It turns out so that I need rod lightning rods 40 meters high. But if I take the same supports and run a wire on the perimeter of the warehouse, then I will get protection reliability of 0,01 at the height of wire hanging of 28 meters. Imagine the difference of 12 meters is not only in money, which will be spent on the cost of supports. 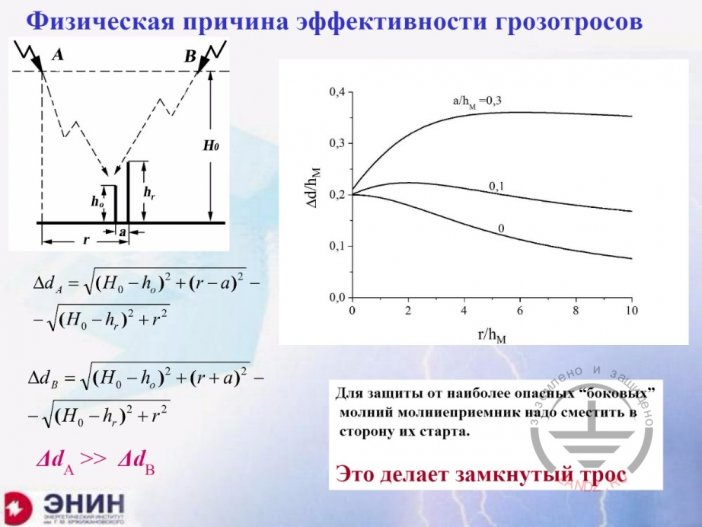 Для защиты от наиболее опасных боковых молний молниеприемник надо сместить в сторону их старта – for the protection of most dangerous side lightning, the lightning rod should be moved to the side of their start

Это делает замкнутый трос – the closed wire will make it 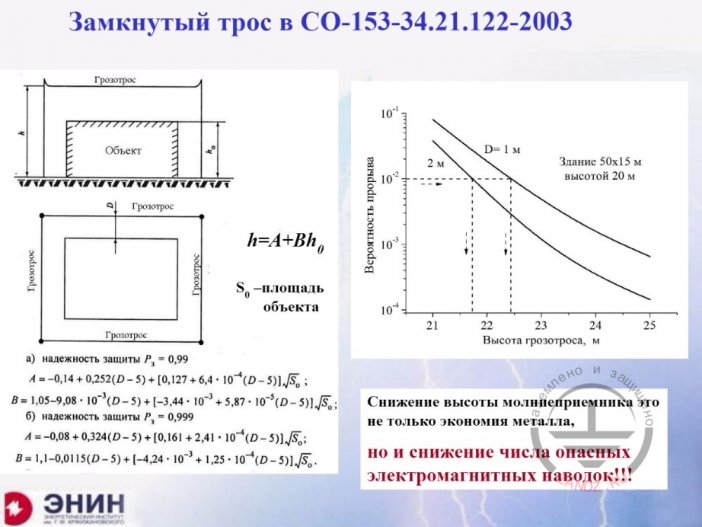