About Lightning Protection of Chimneys

Why do we need to protect a chimney against lightning? This is probably because it is very high? Why, indeed? Standard IEC 62305 and Russian lightning protection document SO-153-34.21.122-2003 do not even mention chimneys. Previous Instructions for Lightning Protection RD 34.21.122-87 consider chimneys more carefully. First, they are considered as natural lightning arresters and are recommended for the protection of adjacent buildings and lower structures. Second, such chimneys over 15 m high are to be protected against direct lightning strikes irrespective of the material they are made of (see Table 1). Then, item 2.31 of the Instructions states that we only need to protect non-metal chimneys, including the ones made of reinforced concrete. To do this, it is recommended to install one, two, or three lightning rods for the chimney up to 50 m, 150 m, or over 150 m high, respectively. The height of these lightning arresters should be at least 1 m. However, for the chimneys over 150 m high, requirements to the rod height become weaker for some reason. Here, lightning rods may be only 20 cm. Even a flat ring can be used along the external perimeter of the upper chimney endface.

It is not clear how to treat all of these confusing aspects. The directions fully contradict regulatory requirements of this document concerning the lightning arrester selection. According to the prescribed method, they must be higher than the protected facility by at least 8%. Thus, for the 150 m chimney, we should talk about lightning rods at least 12 m high. Evidently, regulatory requirements to the chimney protection do not make sense at all. We have to begin from the start.

Why should we protect chimneys? The answer "because they are tall" is noteworthy. A high structure attracts lightning from a rather large area. Its radius is Rat ≈ 3h. With the height h = 100 m (it is a moderate height for the chimney of the industrial boiler house), in the moderate climate of Russia, the chimney will be exposed to about 1 lightning strike per year and thus will be a source of pretty often and dangerous electromagnetic interference in close vicinity. Therefore, the chimney should not be protected but rather de-installed, since the lightning arrester installed on the chimney will not decrease the electromagnetic field from the lightning current, and it will not protect against electromagnetic interference.

It is hard to believe that the boiler house will not have a chimney. Then, we can only hope to install DAS. The volumetric charge cloud above the system will make the chimney invisible for the lightning. It will not see the difference between the chimney and the metal DAS structure located above it. As a result, frequent electromagnetic interference will stop. However, in case of such design, the chimney will not be able to function as a natural lightning arrester. It is because, with the installed DAS, it will stop attracting downward lightning. The designer will have to solve on which is more important for the designed facilities: the use of the chimney as a natural lightning arrester or the reduction in the number of dangerous electromagnetic interference in the adjacent structure circuits. You cannot kill two birds with one stone in this case.

There is also a problem with the DAS material. Flue gases often contain chemical active components, primarily sulphur. Together with water vapors, sulphuric acid is also produced upon condensation. In the acidic rain atmosphere, thin DAS. corona needles will operate. Their material have to be particularly resistant to corrosion.

Most today's chimneys are made of reinforced concrete. Its condition significantly differs from the reinforced concrete used for the building foundations impregnated with water. Dry concrete of the chimney is not conductive externally, but internally, the lightning current may be transported in the soot layer. In these conditions, the effects of the direct lightning strike to the chimney cannot be exactly predicted. 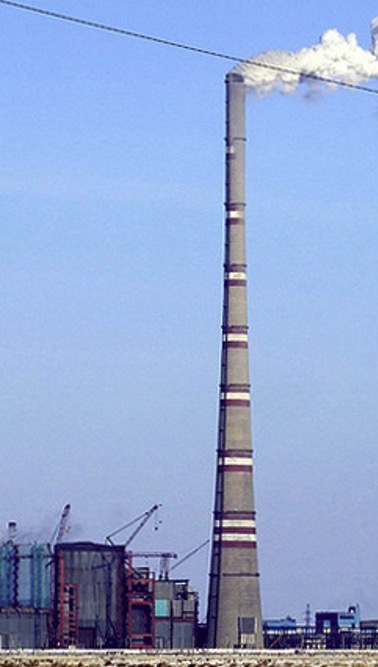 The figure shows a chimney of the Ekibastuz GRES, which is 420 m high. We can easily see that its endface diameter is essentially less than 10 m. Now imagine 3 rods 20 cm high, using which, according to the authors of Instructions RD-34.21.122-87, we should protect the chimney against the direct lightning strike; or a ring installed along its external perimeter. Such technical solutions cannot cause any other positive reaction except for a skeptical smile. It is clear that, with this lightning protection, for the years of operation, high chimneys have taken more than one direct lightning strike. A layer of dry concrete must have been exposed to the lightning to the nearest metal reinforcement bar. Along it, the lightning current will flow to the chimney foundation that functions as its grounding arrangement. It is hard to suppose any possibility of any significant damage of the surface concrete layer. Such damage is typical of composite or polymer materials with large gas-generating capacity. The generated electro-hydraulic impact is like an explosion. This impact is not typical of the concrete not impregnated with moisture. Most likely, the damage in the striking point will be minor. At least it will not affect the mechanical strength of the chimney.

Another course of events is also possible. A soot layer covers the internal surface of the chimney. In fact, it is almost a clear carbon having a rather high conductivity. If the chimney is not covered with the metal cap (smoke jack, chimney bonnet), lightning may strike the internal chimney surface. To a certain extent, the reduced density of hot fume gases will promote this. Their temperature exceeds the ambient temperature for at least 1000C, due to which the density will reduce by about 30%. This is a dramatic decrease. Due to this, the electrical strength will drop by about the same extent encouraging the lightning to "look" into the chimney. The operating experience confirms the possibility of such situation. Even damage to the internal surface of the chimney has been observed.