Lightning protection in the rural areas

The title of the article may cause raising eyebrows of the specialists that is rather predictable. The lightnings are exactly equal in the city and in the countryside, and the nature of buildings has not had any special differences for a long time. There is clearly no need to talk about any fundamental differences. What is this article about then? It should be necessary to dwell on two points. Firstly, the low-rise residential rural buildings can obviously do with the simplified lightning protection. It is important to offer simplifications that, nevertheless, will provide rather reliable protection for the low height structures, guarantee the safety of people and animals, and in addition, keep all household electronic devices in good working order. There are enough of them today in any rural house. Secondly, the industrial and public buildings in the rural areas, equipped with quite state-of-the-art electronic equipment, as a rule, are supplied with electricity via the 0.4 kV overhead lines with increased length. They are more likely to suffer from the thunderstorm electromagnetic interference and therefore need better protection.

The questions raised are discussed in this article.

It is better to start with the natural lightning arresters. In the rural areas, their role is most often played by the trees. Having estimated the height of the tree and visualizing it as a single interception rod, it is easy to build a protection zone. For this purpose, the provisions of section 3.3.2 in the guidance SO-153-34.21.122-2003 can be used. It is not improbable that there will be several lofty trees. Then it is possible to develop a protection zone with double lightning arresters or use a calculation program on the ZANDZ website that will consider the total protective action of all neighboring trees. Due to the high conductivity of the trunk, they can be regarded as the metal lightning arresters. There is no sense in an additional lightning rod and down conductor along the trunk. There won't be much benefit from it. Unless there is a desire not to damage the tree. As for the lightning frequency, it will not be very high. Thus, a tree with the height of 20 m in an open area in central Russia will be struck by lightning no more often than once every 20 - 25 years.

If there are no tall trees, the lightning rods will have to be installed on the roof of the building. The most common question here is the ability to use a metal roof as the lightning rod. At present, it is most likely that the roof is covered with a corrugated steel sheets or metal tiles. Their thickness is much less than 4 mm, and due to this value the steel sheet is considered absolutely impenetrable for lightning. In such conditions, the actual regulatory documents SO-153-34.21.122-2003 and IEC 62305 allow using the roof as the lightning rod, provided that there are no combustible structures underneath.

It is common knowledge that in Russia the roof timbers and roof sheathing of individual buildings are wooden. My attempts to find out the role of wood impregnation with the advanced fire retardants have not led to a definite answer. After examining the attic of my own house, the questions of this kind have dropped naturally. Over the years, the combustible trash in the attic has congregated in sufficient scale. When the lightning strikes, its channel does not penetrate under the roof, but a drop of molten metal weighing several grams falls into the attic. There is no doubt that it will find everything that can be burnt.

There is no doubt that the thin metal roofs must be protected from the direct lightning strikes!

Even a two-storey house in the open area is unlikely to exceed 10 m in height. In the case of such a building in central Russia, it can be approximately 1 lightning every 50 years of operation. For someone who has built a house, this is almost a lifetime. However, it's better not to risk your own home. Any engineer who is familiar with the basics of lightning protection can easily choose the correct lightning arrester according to the protection zones. Reliability with the value of 0.9 is sufficient. With the expected lightning frequency with such reliability that occurs once per 50 years, the lightning achievement of the house will, on average, occur once every 500 years. In fact, the risk is negligible.

Now it is necessary to speak about a seemingly no-win situation when you don't have to rely on a specialist, as well as on your own knowledge. Please do not despair. . A metal wire or cable leaded along the roof ridge with an excess of about 2 m can be considered a rather acceptable solution. For this article, a series of computer calculations were performed. It was assumed that the height and length of the building is 10 m (by the way, the length does not really matter). Even in the case of an almost flat roof, the leaded cable with a building width of 6 - 8 m will catch about 80 - 65% of lightnings, thereby bringing the average safe service life to 250 - 150 years. This is much better than nothing. In the case of an inclined roof, the situation becomes more favorable. With a height difference of 1 m (between the ridge and the leaded cable), the estimated safe service life will increase in comparison with the one given in this document by about 4 times. The game is clearly worth the candle.

I believe that the question of lightning protection grid cannot be avoided. It is very difficult to understand why it is so desirable for the state regulatory authorities. In fact, the situation with grid is simple. It is designed to be placed on a non-metallic roof when the protection of people and equipment on the top floor under such roof is required (see clause 2.11 of the regulatory document RD 34.21.122-87). Having an excess of 2-4 m above the protected facilities, the grid is used as a multi-electrode wire lightning arrester. The grid is useless on a metal surface. The lightning is unable to distinguish it with an excess of 3 - 4 mm.

This problem is especially relevant for the rural areas. As a rule, the power is supplied via the 0.4 kV overhead lines with a sufficiently long length, often with the ordinary uninsulated wires, separated by tens of centimeters. The circuits formed in such a way are an ideal place for the excitation of powerful electromagnetic interference due to the lightning current. Their frequency is much higher than the frequency of a direct lightning strike into the house. Protection is vital, and the surge protection devices (SPDs) are rather expensive. It is important to minimize costs, and for this purpose it is necessary to know with what currents are used by the SPDs.

The direct lightning strike in the power transmission lines. The average distance from the house to the substation is about 300 m. When the lead height is 5 m, the lightning cover radius on each side of the overhead line will be 15 m that in total provides a cover area of ~ 0.01 km2, and the annual number of lightning strikes in central Russia will be close to 0.03 - 0.04 (on average, once every 30 - 25 years). This is not too different from the expected number of strikes directly to the house.

The lightning electromagnetic interference on the power transmission lines. Its level in the conventional wires of overhead lines (uninsulated wires) is estimated as follows: 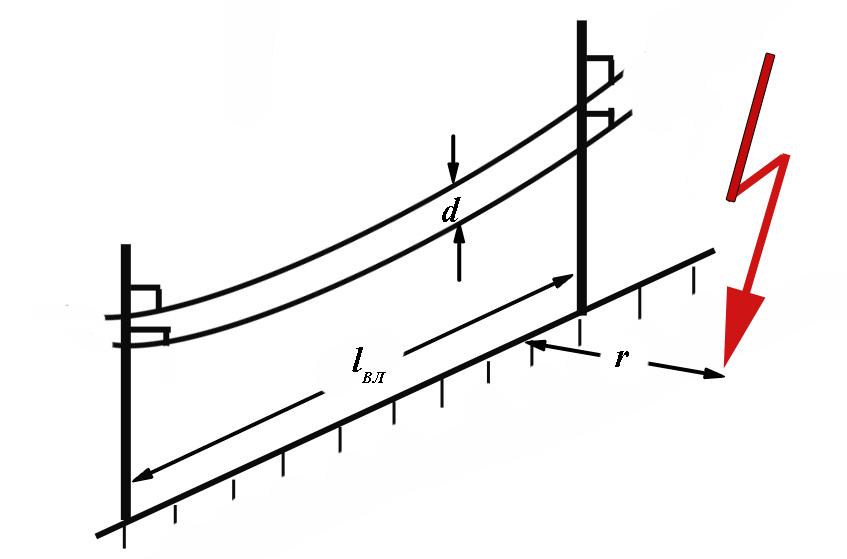 Fig. 2
For assessment of the magnetic induction EMF from the lightning current

where AI is the lightning current steepness, and all geometric dimensions are indicated in Fig. 2. For the overhead lines with the length of 200 m at d = 0,5 m, even a moderate lightning current with a front steepness of only 40 kA/μs induces a really dangerous interference of 2.5 kV from a distance of 215 kV. The frequency of such an event is close to one action in 4 years that is incomparably more often than the direct lightning strike. It would seem that this circumstance should determine the SPD selection. In the case of an induced impact, the lightning current does not flow through it, and therefore it seems reasonable to use the class II SPD based on the variable resistor with an operating element being a fairly cheap zinc oxide washer (a restrictive SPD).